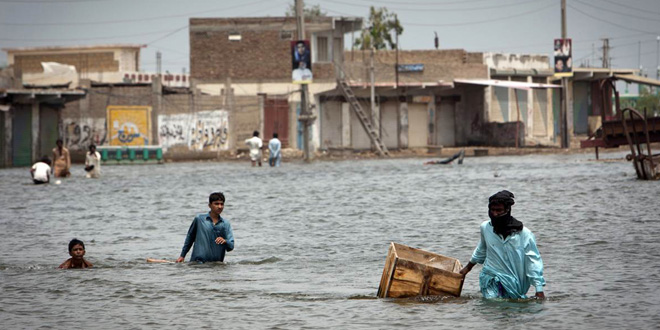 The present floods triggered by the monsoon rainfall have taken the lives of 118 citizens, flushing acres of land and leaving numerous homeless.

To control the extent of the damage, Pakistan’s armed force is maintaining close contact with the National Disaster Management Authority (NDMA) in the current rescue and relief operation called “Operation Madad”.

NDMA has accelerated the rescue operations in flood affected areas of Pakistan, as more villages are being swamped by the enraged flood water. In Sindh alone, more than 400 villages have been flooded.

As per sources, 771,099 people had been evacuated from affected areas of the country and more than 1500 tarpaulins, over 8000 blankets and tents numbering 71,355 had been provided to the affected people until yesterday.

It further revealed that 76,993 affected people are being provided with basic aid in camps in Sukkur, ShaheedBenazirabad, Larkana and Hyderabad Divisions.

The locals of the riverbed areas of Sindh informed HTV that political parties have also installed camps and had been distributing food and medicine among them. The armed forces of Pakistan had been doing the rescue and relief work in Sindh’s swamped areas from the very start – the military has set its own relief and medical camps throughout the province.

Meanwhile, the district administration of Sajawal and Thatta has advised locals to shift from riverbed areas to safer grounds as the water level of Kotri Barrage is increasing.