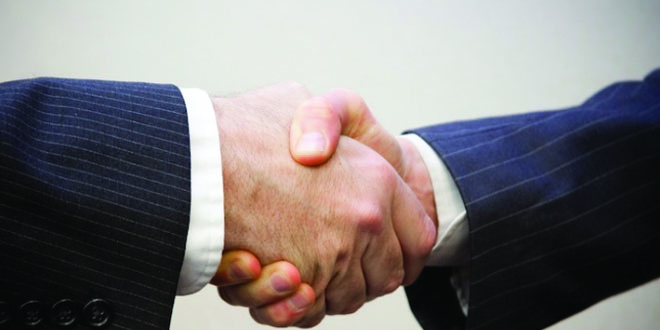 A firm handshake could mean a healthy heart

Testing people’s hand strength could be a simple, low-cost way to screen them for the risk of heart attack or stroke, says an international team of scientists.

The large-scale Canadian-led research, published today in The Lancet, provides evidence that a firm hand grip is a rough yet reliable indicator of good health.

“Grip strength could be an easy and inexpensive test to assess an individual’s risk of death and cardiovascular disease,” says Darryl Leong, an assistant professor of medicine at McMaster University in Hamilton, Ontario, who led the investigation.

“Doctors or other healthcare professionals can measure grip strength to identify patients with major illnesses such as heart failure who are at particularly high risk of dying from their illness.”

The study covered nearly 140,000 patients aged between 35 and 70 in 17 countries, whose health was monitored over four years.

During checkups, the patients were asked to grasp a gadget called a Jamar dynamometer, which measures muscle strength.

Every five-kilogram decline in grip strength was linked to a 16 per cent increase in the risk of death from any cause over the study’s four years.

Hand grip is a stronger forecaster of early death than systolic blood pressure, the study found.

The results were the same when factors such as age, tobacco and alcohol use, education level and employment statuses, which affect health, were taken into account.

There was no link, though, between grip strength and diabetes, respiratory disease, injuries from falls or fractures. More work is needed to calibrate hand grip, as the strength can depend on the individual’s size, weight and ethnicity.

Research, too, is needed to understand why muscle strength seems to be a tell tale of health — and whether the risk of death and cardiovascular disease could be eased by improving muscle tone.