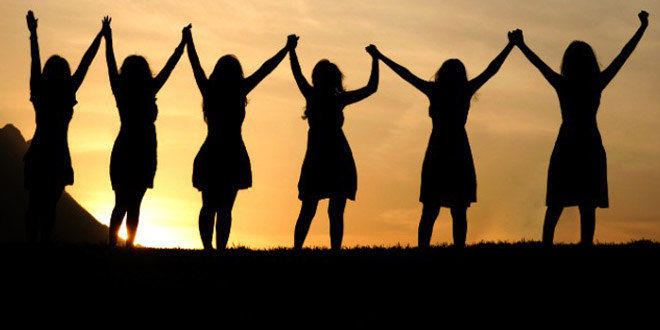 It is not only animals that rely on physical cues to gauge the fertility of potential rivals for a mate, an unusual study asserted.

Without knowing it, human women seem to be able to recognise others in the most fertile phase of their menstrual cycle, around ovulation, simply by looking at their faces, it said. And intriguingly, this ability was pronounced in women with high levels of oestradiol, a female sex hormone linked to high general fertility.

The findings implied that more fertile women, who are likely to have more children in their lifetime, “are better at guarding their mate from potential adultery”, study co-author Janek Lobmaier of the University of Bern told AFP.

The paper was published in the Royal Society Journal Biology Letters.

Previous research had shown that men prefer portraits of women taken around the ovulation period over those of the same women in a non-fertile phase.

Few studies, if any, have tested whether women too can discern such cyclical facial differences.

Lobmaier and a team showed pairs of photographs of women – one taken in the most fertile and one in the least fertile phase of their menstrual cycle – to over 200 other women, some in an online survey and others in the lab.

Unlike men, women did not find the faces in the portraits more or less attractive depending on when they were photographed, the team found.

Overall, they also did not suspect either version to be more likely to “entice your date away from you”, as the question was phrased.

But looking at a subgroup of respondents for whom the team had data on naturally-occurring hormone levels, the team found an interesting trend.

Those who were not ovulating but had high oestradiol levels were more likely to pick the photo of an ovulatory woman as a potential date thief.

“One explanation for our findings might be that ovulatory women (who are currently fertile) pose a greater threat to women with high oestradiol levels (who are currently not fertile but have a high potential fertility),” said Lobmaier.

The study did not test the potential influence of naturally fluctuating oestradiol levels.

“In humans, these changes are not obvious, so many researchers have suggested that ovulation is concealed in humans,” said Lobmaier.

“But there is accumulating evidence that there are subtle changes in human females that are not obvious, but they can still be detected.”

Women are fertile for a relatively short period of their menstrual cycle – a few days before and the day of ovulation.

As with animals, it is theorised that if men can detect this window, it boosts their ability to spread their genes.

“For women, there is perhaps no direct advantage to detect fertility in other women’s faces, but their might be indirect benefits, for example by making sure her own partner does not commit adultery,” said Lobmaier.

The women in the study were not told its purpose.

Lobmaier said the effects of this evolutionary ability were probably a “really, really, really small” part of human behaviour.

“They are interesting from an evolutionary point of view, but how big the influence is on our daily lives we can’t really say.”