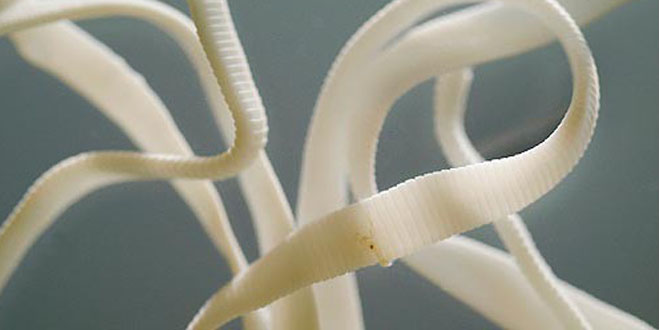 Experts ‘amazed’ by tapeworm that spread tumors to man

Stunned scientists described on Wednesday the first known case of a man infected with tumors by a common parasitic tapeworm, raising concern about more such infections that may go undetected.

“We were amazed when we found this new type of disease -– tapeworms growing inside a person essentially getting cancer that spreads to the person, causing tumors,” said Atis Muehlenbachs, staff pathologist in the US Centers for Disease Control and Prevention’s Infectious Diseases Pathology Branch.

“We think this type of event is rare. However, this tapeworm is found worldwide and millions of people globally suffer from conditions like HIV that weaken their immune system. So there may be more cases that are unrecognized,” added Muehlenbachs, lead author of the study in the New England Journal of Medicine.

The case involved a 41-year-old man in Colombia. He was HIV-positive and not been taking medications when in 2013, he went to his doctors with a cough, fever and complaints of weakness and weight loss.

His doctors took biopsies from his lymph nodes and lung tumors, and appealed to the CDC for help in diagnosing some bizarre-looking lesions which looked like human cancer, but initial lab tests showed they were not human.

Puzzled, scientists kept searching for the cause of the man’s disease.

“The growth pattern was decidedly cancer like, with too many cells crowded into small spaces and quickly multiplying,” the CDC said in a statement.

“But the cells were tiny — about 10 times smaller than a normal human cancer cell. The researchers also noticed cells fusing together, which is rare for human cells.”

After dozens of tests, they found DNA from Hymenolepis nana, the dwarf tapeworm, in the man’s tumor in mid-2013.

The man died soon after.

The dwarf tapeworm is the most common tapeworm in humans, and infects up to 75 million people at any given time.

People can get it by eating food that has mouse feces on it, or ingesting feces from an infected person.

It often affects children, and many people show no symptoms.

“However, in people whose immune systems are weak, including people who have HIV or are taking steroids, the tapeworm thrives,” the CDC said.

This is only one of some 3,000 known tapeworms that can complete its entire life cycle from egg to adult tapeworm in an individual’s small intestine.

Rarely are infections of the tapeworm found outside the small intestine, but in the case of the Colombian man, his weakened immune state may have enabled the parasite’s cancer to spread through his body.

“Malignant transformation of H. nana may be misdiagnosed as human cancer, particularly in underdeveloped countries in which HIV and H. nana infections are widespread,” said the study.

“The host–parasite interaction that we report should stimulate deeper exploration of the relationships between infection and cancer.”

Ways to avoid infection include washing hands with soap and warm water and by washing, peeling, or cooking raw vegetables and fruits before eating.

The CDC said it is unclear whether human cancer treatments would help in such cases, but urged physicians in developing nations to “be aware of the possibility of similar illnesses, especially if they have patients with weakened immune systems who have tumors.”