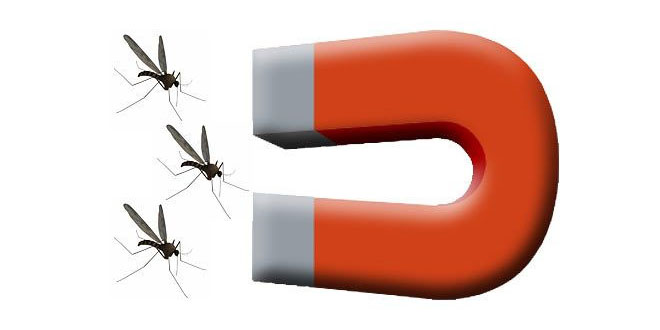 Ever wonder why Mosquitoes find YOU extra tasty

According to a study of twins, one’s DNA is the main factor that makes him more appetizing to the pesky insects. The study can identify the genes involved and could help scientists create even more effective mosquito repellents.

Scientists have discovered why mosquitoes may be more attracted to some people compared to others; and they believe that people who are being attacked more should blame their parents.

For the first time, scientists discovered a possible genetic reason why some of us are mosquito magnets, at least according to a pilot study from the London School of Hygiene &Tropical Medicine. It’s published in the recent edition of PLOS ONE.

To figure this out, scientists released dengue mosquitoes, into a tube which was divided into two sections. The bugs were essentially given a choice to swipe left or swipe right and fly down either side. At the other end of the tube was a pair of human twins. Eighteen identical and 19 non-identical female twins volunteered to be mosquitos’ food.

This research builds on earlier studies that show a person’s body odor may play a role in who gets bitten more. Earlier studies have found people with a particular type and volume of bacteria that naturally occurs on skin may make people more of a target. Same with people with Type O blood, which is linked to a particular odorant marker in sweat.

Earlier studies had shown that a person’s odor may play a role in who gets bitten more; particular type and volume of bacteria that naturally occurs on skin may also make people more of a target. This is also the case in pregnancy, when average body temperature rises by 1.26 degrees causing women to sweat more or even generally in heavier people.

Even though scientists believe that more research is needed on this topic, this still leads to a fact that neutralizing this particular odor, if that’s what the mosquitoes like, could mean fewer mosquito bites, and it may mean fewer cases of yellow fever and dengue since these particular bugs are often the carriers of these viruses.

In the meantime people are suggested to wear the bug repellants any time they go outside. “We’ve gotten pretty good about sun screen, but people need to get better about protecting themselves against insects as well, since mosquitoes are more than just a nuisance. They carry disease.”

Henriksen and the Centers for Disease Control and Prevention recommend using products that have one of four active ingredients. Check the label for DEET, picaridin, IR3535 and/or lemon eucalyptus and para-methane-diol products. These products are effective, and they are registered with the EPA (meaning the EPA believes the chemical will only hurt the mosquitoes not you).

Henriksen also suggests you may want to wear shirts with long sleeves and long pants if you can stand it in the heat of summer.