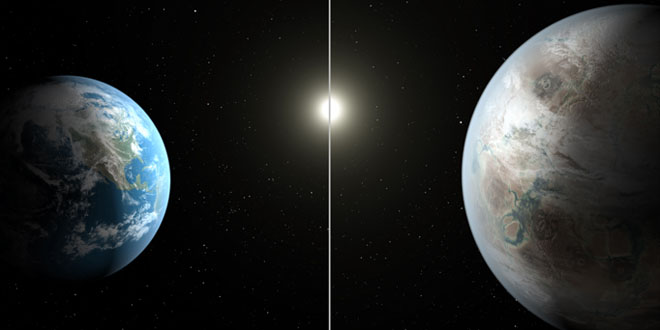 On Thursday, NASA announced that its Kepler spacecraft has discovered the first planet which had nearly the same conditions as Earth and was possibly a habitable zone similar to our own.

What is being dubbed as “Earth’s bigger, older cousin” is named Kepler-452b by NASA’s scientists and it is approximately 1,400 light-years away from Earth in the Cygnus constellation.

Whether this new planet has the same time of rocky surface with air and water like ours is yet to be confirmed. However, this is the closest that any planet has come to resemble to Earth.

According to NASA, Kepler-452b is almost 60% bigger than our planet and is located in its star’s habitable zone, which is the region where life-sustaining liquid water is possible on the surface of a planet.

The gravity there is about twice as much as Earth’s, and planetary scientists say the odds of it having a rocky surface are “better than even”.

While it’s a bit farther from its star than Earth is from the sun, its ‘sun’ is brighter, so the planet gets about the same amount of energy from it as Earth does from the sun. And that sunlight would be very similar to Earth’s, said Kepler researcher Jon Jenkins.

“Today, Earth is a little less lonely,” Jenkin said, while talking to CNN.

Pictures of the planet have taken over the internet and people have had different reactions to this new discovery. Some were awe-struck while others showed their excitement the only way they knew how; via humor.

Here is how some of the people responded:

Diff between our Earth & Earth 2.0 is the diff between Kate Winslet & Kate Upton (in that order) – Larger & Hotter

GUYS IF THAT PLANET IS OLDER THEN *WE* ARE EARTH 2.0 AND NOT THEM. RESPECT YOUR ELDERS

If NASA can discover an Earth 2.0 we can ALL make it to the weekend! ❤️🌏 pic.twitter.com/wYCl7tnnT1

I hope there's a load of people on Earth 2.0 talking on their Twitter about us.

Whenever someone talks about Earth 2.0, I just think of "Wall-E". 🌍 pic.twitter.com/rW8ZJw1lZq

In the coming year, NASA plans to launch a planet-hunting satellite called TESS that will be able to provide scientists with more detail on the size, mass and atmospheres of planets circling distant stars.