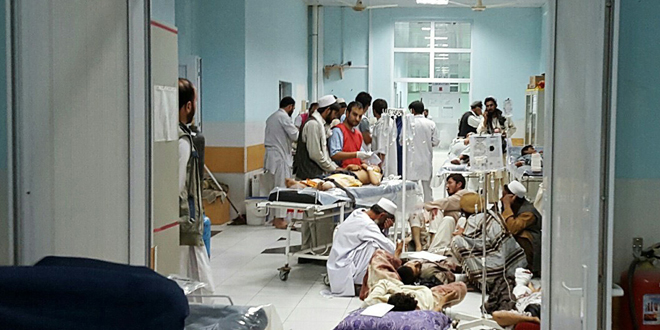 Doctors Without Borders (MSF), whose Kunduz hospital in Afghanistan was hit by a suspected US air strike on Saturday, is one of the largest medical charities in the world, counting more than 36,000 volunteers working in 60 countries.

MSF was founded on December 21, 1971 when a team of French medics and journalists, including humanitarian icon Bernard Kouchner, denounced what they described as a genocide in secessionist Biafra, in Nigeria.

The non-profit provides emergency medical care in war zones, during epidemics and in the wake of natural disasters, and is a self-governed group of 24 associations worldwide, based in Switzerland.

Its stated commitment to caring for patients regardless of race, religion or political affiliation and reputation for working in the toughest of conditions saw it awarded the Nobel Peace Prize in 1999.

In 2014, the charity oversaw 384 projects worldwide, 31 percent of which were linked to armed conflict.

Operations in Sudan, the Democratic Republic of Congo, Central African Republic, Haiti, Sierra Leone, Afghanistan, Niger, Liberia, Ethiopia and Iraq take up just over half of the organization’s total spending.

On its website, MSF says it “rejects the idea that poor people deserve third-rate medical care and strives to provide high-quality care to patients,” and is well known for bringing the public’s attention to forgotten conflicts through its work.

Last year, the organization treated more than half a million patients in clinics and hospitals across 63 countries, including 2,200 suffering from the Ebola virus.

It works to combat the spread of diseases such as malaria, with 2.1 million patients treated last year, as well as HIV and cholera, according to a report by the charity.

Another focus is malnutrition. MSF doctors cared for more than 200,000 severely underfed children in 2014.

MSF is funded overwhelmingly by a network of 5.7 million private donors, who provided 89 percent of its $1.44 billion budget last year.

MSF has inspired a number of imitations — including Hospitals without Borders and Reporters without Borders — groups which set out to improve hospitals in developing countries and to campaign against ill-treatment of journalists respectively.

6 things you can do to stay healthy during the monsoon