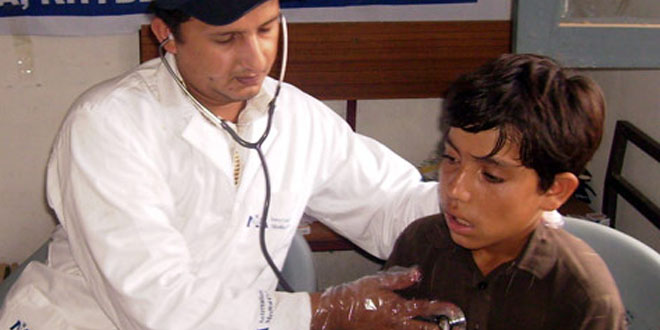 On Tuesday, members of the Provincial Doctor’s Association (PDA) in Peshawar protested against the newly approved Medical Teaching Institutions Reforms Bill, by tying black bands around their arms.

The said bill, which was passed by the Khyber-Pakhtunkhwa assembly on January 13th, 2015, has faced great opposition from members of the PDA as they believe that it hinders the public’s right to receive free and concessional healthcare facilities.

The bill proposes that the policy-making of every teaching medical institute will be the responsibility of an appointed board of governors. Furthermore, the board will also be responsible for the procedure of appointing terms and conditions of service and disciplinary matters, approving the yearly business and financial plans, by-laws for medical staff, yearly budget and all major transactions.

Dr Amir Taj, who is the acting president of PDA, reveals that billions of rupees are allocated for the health sector annually yet people are not provided with free treatments and medical facilities by government hospitals. If this bill is implemented, it would make it even harder for the public to get the facilities from the allocated budget, as government officials would fill their pockets first and corruption would ensue, according to Taj.

He also expressed great concern by stating that that the top officials who are currently on the board of governors are all chosen due to political reasons and none of them are selected on the basis of merit. He further stated that if the government really wants merit-based governors, they should put up advertisements for vacancies for a deserving candidate to be chosen.

An open debate was held at the Lady Reading Hospital, where participants argued that the authorities were doing absolutely nothing for the facilitation of the people and their aim was only to make more money for themselves.

Protests were also made against placing the seasonal staff of LRH into the surplus pool. This protest was shown by all the doctors’ nurses and the paramedic staff by tying black bands around their arms.