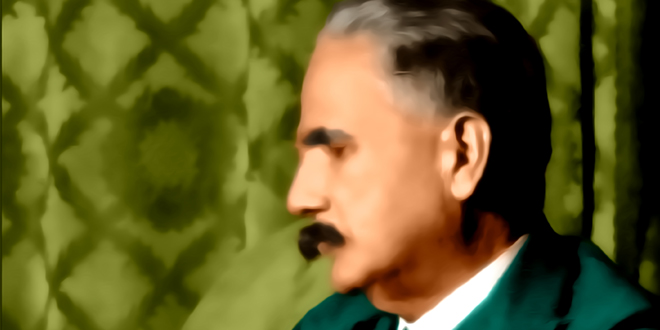 The 77th death anniversary of the National Poet, Dr Allama Muhammad Iqbal was observed  on April 21, 2015 – all over the country.

Allama Muhammad Iqbal was born in Sialkot on November 9, 1877. He is recognized as the national poet, and known as Muffakir-e-Pakistan, Shair-e-Mashriq and Hakeemul Ummat and is credited with sparking the pan-Islamic thought among Muslims of the subcontinent.

He is also considered as one of the most important figures in literature with literary works in both Urdu and Persian languages. Amongst his best works are Asrar-e-Khudi, Payam-i-Mashriq, Bang-i-Dara, Bal-i-Jibril, Zarb-i Kalim and Armughan-e-Hijaz.

Iqbal being a philosopher and poet managed to develop a bridge between the believers and book of guidance in a most effective and simple manner. The national poet, going against the norm of his time, attempted to rekindle the spirit of dignity among the then disillusioned Muslims. He passed away in Lahore on April 21, 1938.

A Quran Khawani was held at Iqbal Manzil Sialkot under the auspices of Bazam-i-Iqbal in which a large number of people from all walks of life participated. They also offered Fateha for the eternal peace of the soul of Allama Iqbal.

Later, contest of Kalam-I-Iqbal was also held at Iqbal Manzil in which a large number of students from different schools and colleges participated.

Meanwhile, a symposium on Iqbaliyat was also held at the auditorium of Sialkot Chamber of Commerce and Industry (SCCI); District Coordination Officer (DCO) Sialkot Nadeem Sarwar was the chief guest.

In Karachi, series of programs by different cultural and literary associations along with educational institutions are being held and addressed by senior scholars and academicians.

Speakers were noticed to be unanimous in their opinion that concerted efforts were needed to get introduced youth across the country to the message of Iqbal.

Dr Shahryar Ali, an expert in theology said the Muslim world today is exposed to internal challenges as no or little efforts have been made towards the essential requirement of “Ijtehad” or deep thinking and contemplation over the years.

Conditions in the present day Muslim world, they said demanded believers, particularly the youngsters to develop connection with the Almighty Allah and make meaningful efforts to decipher teaching of Quran and also the Sunnah of Prophet Muhammad (peace be upon him).

Senior educationist Prof Anwar Ahmad Zai addressing one of these sessions said Muslims in general and youth in particular are in real quandary.

Concerted efforts to promote his poetry and philosophy holds absolute relevance even today and the government as well as organizations in their individual capacities must take up the responsibility.