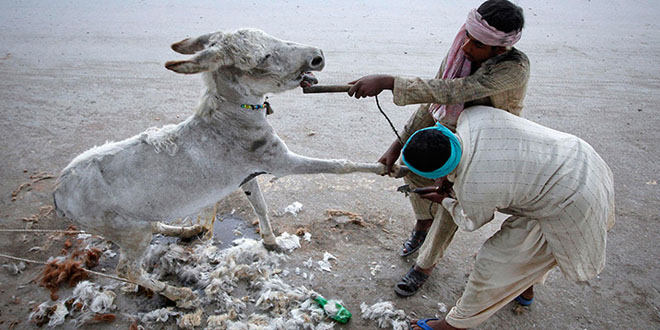 A man and a woman were caught red-handed whilst slaughtering a donkey, by the local residents of Mandi Shah Jivani. On discovering this, the residents started beating and manhandling the couple, until the police arrived to arrest them.

According to reports, when the residents witnessed the woman slaughtering a donkey, they tried to stop her but she started to threaten them with a knife. This led to more people joining the group and when the group tried to approach the woman and the man with her, they started running. However, they were soon caught and the angry mob started beating them up.

Seeing all this commotion, the police was called which came and arrested the couple. Upon interrogation, the couple confessed that they had been selling donkey meat to butchers in their area and other areas too.

This is not the first time such an incident has taken place. A couple of years back, a man was arrested on similar charges in Karachi for selling donkey and dog meat to the public. The local health department needs to be more vigilant about these incidents to reduce their occurrences. So far, the health department has made no comments about this arrest.