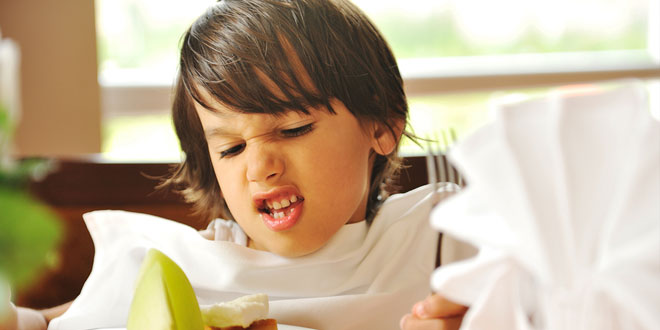 If your children are picky when it comes to food, do this

New research suggests that parents could play two roles in influencing their children’s eating habits, by both passing on their genetic makeup and serving as role models of eating behavior.

“If we ask ourselves, ‘Are fussy eaters born that way or do they learn it in the environment?’ the answer is ‘yes,’ both are true,” says Myles Faith from the University of Buffalo, co-author of the two new studies, published in the journal Eating Behaviors and the American Journal Of Clinical Nutrition.

Faith believes the examples set by parents, and other caregivers, are particularly important for children who show “higher emotional distress” or “difficult temperament” when eating as these children are more likely to have a higher Body Mass Index through age 6.

“Parents may need a bit more understanding and patience when introducing foods to fussy or picky eaters,” says Faith, “The children really aren’t intending to be difficult. Being fussy seems to be their nature around new foods, and it can be quite distressing for them if they are overly forced, pressured or coerced. This can backfire and lead to greater frustration.”

Faith also made similar conclusions from his previous 2013 study published in the journal Obesity.

In this study Faith and his colleagues reported that “food neophobia” – the tendency to avoid new foods – is both genetically and environmentally influenced in 3- to 7-year-old children.

From his research Faith recommends the following “positive parenting approaches” – steps that parents can take to set good eating examples for their children:

Be a better role model by eating healthier foods with your child. “Don’t just preach,” Faith says, “but reach for the foods, as well.

Be aware of portion control. There is strong evidence to suggest that children will eat more, or less, depending on the amount of food put in front of them, “So caregivers might supersize the fruit and vegetable portions, while reducing the portions of less healthy foods,” he says. “We might call this ‘strategic nudging.’”

Children like to have choices, Faith says. “So parents can encourage children to make selections among a few healthier items,” he says. “For example, ‘Apple, grapes, carrots – pick one please,’ rather than offering no choice, but telling the children ‘Eat your vegetables.’”

Keep it positive and don’t pressure or force, as this will lead to children resisting, according to Faith. “Strategies such as praise, reinforcement or a simple ‘thumbs up’ for healthy food choices generally are the way to go.”

food for childrenfood tips for childrenpicky food by children
Comments
Loading...
Stay With Us