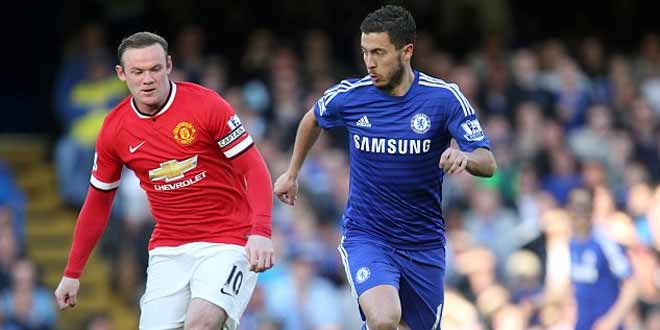 Chelsea One Step Closer To the BPL Title

Chelsea welcomed United at the Stamford Bridge. The men in blue have been supreme this season at home as they have not tasted defeat at home since Sunderland beat them last season, courtesy of a Fabio Borini penalty.

Manchester United was without the likes of Daley Blind, Micheal Carrick, Marcos Rojo and Phil Jones. Captain Wayne Rooney was allocated the defensive midfielder role and Radamael Falcao started as the lone striker for the Red Devils.

The first chance of the game came to the visitors when Luke Shaw went pass Chelsea’s right-back Branislav Ivanovic and cut back a grounded ball to Wayne Rooney, but he wasn’t able to guide it into goal. The deadlock was broken in the 38th minute when Oscar played in Eden Hazard with a sublime backheel pass, which was smartly finished by him with his weaker boot. 1-0 to Chelsea.

Eden Hazard’s 13 th goal of the campaign and arguably one of the most important one this season. His chances of the grabbing the accolade are more certainly clear now. A trio of yellow cards was shown to Chelsea players -Didier Drogba, Branislav Ivanovic and Oscar- for their rash tackling in the 54th, 57th and 63rd minute.

United had 71% possession of the ball, but had only 2 shots on target from a total of 14 shots attempted. Ander Herrera was booked in the dying moments of the game as he attempted a dive in Chelsea’s penalty-box. Mike Dean was spot on with the decision.

The results of Saturday’s live action from the Barclays Premier League are as follows:-

Luis Suarez and Lionel Messi help Barca to secure a 2-0 victory over Valencia at the Nou Camp. Real Madrid keeps the pressure on Barcelona, as Cristiano Ronaldo stars in a 3-1 victory over Malaga. Antoinne Greizmann’s brace secured a 1-2 away win for Atletico against Deprotivo La Coruna.

Luis Suarez scored Barcelona’s fastest goal in La Liga history. He scored on a Lionel Messi pass, 55 seconds after the start of the game. Valencia after conceding early piled on the pressure. For their endeavors, they got a penalty in the 10th minute. Claudio Bravo produced a smart save from the penalty. Lionel Messi didn’t have the best games of the season, but he reached a personal milestone after scoring in the 90th minute, which proved to be his 400th goal for FC Barcelona.

An outstanding achievement by the Argentine hit man. Going back to the archives, Messi scored his first ever Barca goal on 5th May 2005. Antoinne Greizmann’s brace helped Atletico to bag a crucial win against Deprotivo La Coruna at the Riazor Stadium. His strikes in the 5th and 22nd minute proved pivotal in securing all three points for Diego Simone’s men.

Cristiano bagged a goal and two assists as Real Madrid start to gather pace for the final charge in the La Liga title race. Real Madrid scored its first in the 29th minute, courtesy of defender Sergio Ramos. Cristiano Ronaldo proved to be the provider once again, this time to James Rodriguez.

Rodriguez extended Madrid’s lead on the 69th minute. Juanmi, reduced the deficit in the 71st minute. Cristiano Ronaldo then scored in the 90th minute, assisted by Manchester United loanee Javier Hernandez. This was his 50th goal of the season. A staggering achievement for the Portuguese international.