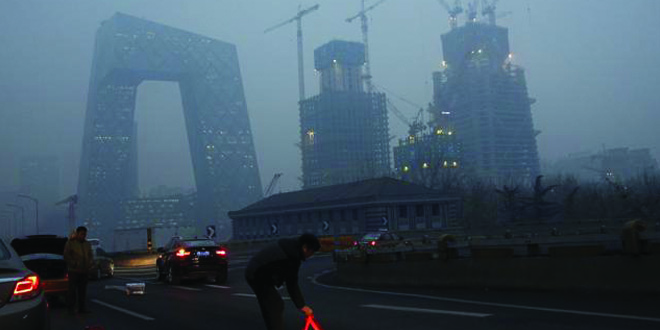 Beijing choked under a thick layer of toxic smog Saturday, after the Chinese capital issued its second-ever red alert and put its emergency response plan into action.

The notice from the capital’s environmental bureau ordered factories to close and pulled half of all private cars off the streets, among other measures, as extreme levels of pollution in the city’s air were observed for the third time this month.

The red alert, the highest tier of a four-color warning system, will last until Tuesday, according to a statement on the Beijing Municipal Environmental Protection Bureau’s website Friday.

On the streets of the city centre, which are normally blocked with traffic, cars were moving with ease as the measures came into effect.

“I’m loving this traffic! Finally we can get around the second ring-road without getting stuck in a jam,” one user of the Twitter-like social network Weibo joked.

“Is it still possible to live in this city?” another asked.

On Weibo and the messaging service WeChat many users said they planned to spend the weekend holed up in their homes to avoid the “airpocalypse”. Elderly people braved the smog regardless for their morning exercises in parks and city squares.

The off-white smog reduced visibility, blurring the edges of even nearby buildings, though the concentration of toxic microparticles had not yet reached the highs recorded in recent weeks, according to official readings.

Counts of PM2.5 – harmful microscopic particles that penetrate deep into the lungs — regularly exceeded 300 micrograms per cubic meter during last week’s red alert, according to the US embassy, which issues independent readings.

The World Health Organization’s recommended maximum exposure is 25 over a 24-hour period.

Most of the country’s greenhouse gas emissions come from the burning of coal for electricity and heating — particularly when demand peaks in winter — which is also the key cause of smog.

The recurrent pollution has driven Beijing residents to hospitals in growing numbers, according to a report on Internet giant Tencent’s news portal.

‘Pot in a bag’ stews rice as it fights pollution