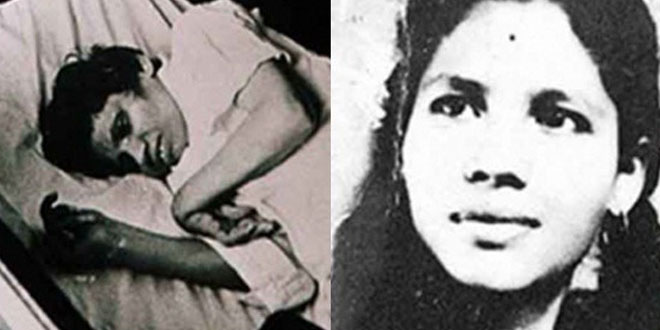 An Indian nurse who spent 42 years in a coma as a result of severe brain damage after being raped and strangled has died.

The nurse, Aruna Shanbaug, was 25 years old when she was sodomised by a KEM hospital cleaner, who strangled her with metal chains and left her to die on 27 November 1973. She survived, but spent the rest of her life in hospital, force fed twice a day.

The nurses used to feed her through nose to keep her alive, until last Wednesday when she created this pneumonia. She was taken to the ICU and put on ventilator support at 8:30am Monday.

Ms Shanbaug’s condition had deteriorated over the years. Ms Viran, an activists who wrote a book on the nurse, filed the case which was rejected by the Supreme Court in 2011. She had argued that Ms Shanbaug was “virtually a dead person” and should be allowed to die. On a contrary, the hospital authorities told the court that Ms Shanbaug accepts food and responds by facial expressions and responds to commands intermittently by making sounds. Her case had sparked a debate about India’s euthanasia laws.

Doctors debate that patients in a vegetative state are awake, not in a coma, but have no awareness because of severe brain damage.

Although the Supreme Court rejected Ms Virani’s plea, the case resulted in India easing some restrictions on euthanasia after the court’s landmark ruling that life support could be legally removed for some terminally ill patients in exceptional circumstances, providing the request was from family and supervised by doctors and the courts.

Ms Shanbaug’s attacker, Sohanlal Bharta Walmiki, was not even charged for raping her since sodomy was not considered rape under Indian laws at the time. He was freed after serving a seven-year-sentence for robbery and attempted murder. He had changed his name and was working as a ward boy in a Delhi hospital. The hospital where he had sodomised Aruna and left her in this permanent vegetative condition had never kept a photo of him on file, neither did the court papers.