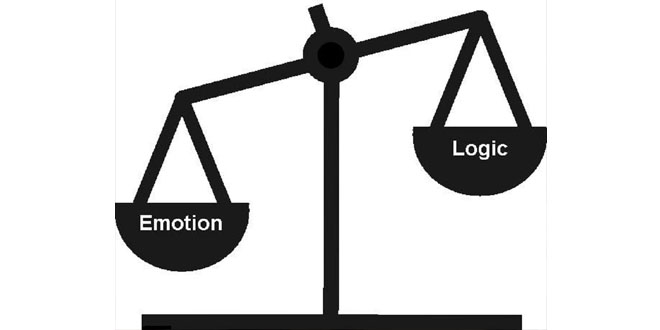 Our brain acts in a manner that restricts us from making decisions on logical basis alone. We make decisions when we feel it is advantageous to do so, though we may not realize it most of the time.

Think of a situation when you tried to convince someone, with invincible facts, logic and reasoning, believing that you would leave no space for argument when you put your case, because you had considered all logical answers – but you still failed to win-over the other person by your logic.

I can think of one from last Monday, when I tried to put forward logic to convince my colleagues at my workplace. I came up with a bulletproof case, armed with reasoning and logic to conquer others, but I failed miserably.

Because when it comes to decision-making, we focus more on emotions than logic, as found in a recent study.

A neuroscientist, Antonio Damasio, made this revolutionary discovery few years back, while studying people whose brain parts that triggered emotions were damaged, for his book ‘Descartes’ Error: Emotion, Reason, and the Human Brain’. He presented a ‘somatic marker hypotheses’, a proposed mechanism by which emotions guide behavior, decision-making and rationality.

The people in his research seemed normal, except that they could not feel emotions and had one thing in common – they couldn’t make decisions. They could describe every single thing in terms of logic, but could not take the easiest decisions like what to eat or what activity to do. Their decision-making depended on the pros and cons from logic – and in the case of eating they could not reach to a conclusion as they found no rational way to decide either to eat beef or chicken, for instance.

His groundbreaking research unearthed the fact that emotions are the most important element in decision-making – even one’s logical decisions are always based on emotions.

According to industrial psychiatrists, you cannot depend on logic, as others do not see things the way you want them to see – what is logical for you may not be logical for them. It would be like making them step into your shoe, every time you want them to take a decision in your favor, which is completely impractical – but this too would include emotions.

Logic alone is not used to influence people; logic is meant for innovations. Aristotle explained neuroscience, 2500 years ago and made an argument openly that emotions drive decisions, but people still confuse them.

Some scientists are even of the view that emotions and logic are not separate but one –as they originate from one place and trigger at one time. They argue that why must they be separate in the first place? In order to be logical, something must either be a cause or an effect. It appears from common sense that emotions are both.

They claim that just as one doesn’t know every single operation with in a car, one still trusts it to work and one believes that it would work as long as it remains in the condition that requires it to work. Likewise, just because one doesn’t know where their emotions come from, does not mean they aren’t logical, if these are bringing a cause or an effect.

What one must do is to use emotions and logic together, by making the other party‘visualize’ their case.

The other party only makes a decision when they want to – and to make them ‘want to’ do what you wish them to decide upon, one must use the step-by-step methodology, that is, to make them discover your logic for themselves. Because everyone makes decisions through emotions.

In that very case of mine, where I failed to make my colleagues to ‘visualize’, failed to show their self-interest in the argument, eventually leading to their decision that did not suit me.

In other cases, such as in industries, ‘professional negotiators’ are made to study brain and the organized way of structuring ‘vision’.

In short, our brain acts in a manner that restricts us from making decisions on logical basis alone; we make decisions when we feel it is advantageous to do so, though we may not realize it most of the times.