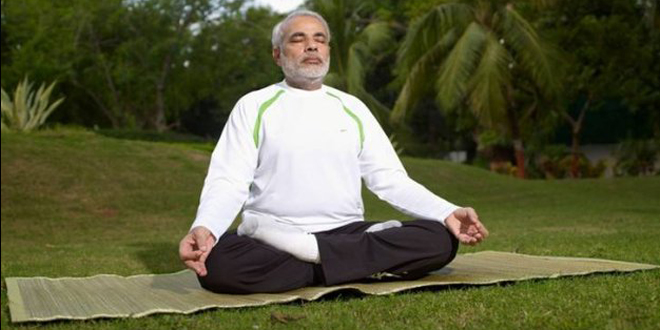 Last month, the Indian prime minister, Narendra Modi, got into quite a squabble at home and abroad when he announced that he will celebrate a ‘World Yoga Day’ to highlight India’s cultural heritage. This move made many people uncomfortable and India’s minority groups (Muslims and Christians) voiced their concerns that this exhibition of promoting yoga was in fact a ploy to highlight the Hindu culture and make the minorities even more marginalised.

Pakistanis held the same notion, partly because they have a need to go against everything that India does. However, I cannot help but agree to what Modi suggested. Yes, yoga is a cultural symbol, but it is also very effective – and can be very meditative and peaceful.

In fact, according to recent researches, there are numerous health benefits pertaining to yoga. And besides, the days of yoga being a symbol of the Hindu religion are way past over. Today, yoga is a fitness symbol, with people all over the world practising it to remain peaceful and healthy. Be it Hollywood actors, business executives or even famous athletes, everyone who is a fitness-buff is prone to practising yoga at least once.

So, to be honest, there should be no hue and cry anymore. For once, let Pakistanis stand behind Modi and practise this wonderful ritual.

If you are still not convinced, here are a few more reasons why you should do yoga.

1) It is not just physical fitness

If we would credit yoga only for its physical benefits, then that would be a great understatement; yoga helps the entire internal system of a body and greatly adds to a healthy lifestyle. It aims at physical as well as psychological health.

Initially yoga was rehearsed to experience otherworldly illumination – even the Sanskrit word for yoga which is “yok” can be translated to mean union, which implies the union of the psyche, body and soul.

2) There are many ways to do it

Numerous classes of yoga have been highlighted over the years.

The most prevalent type is the Hatha yoga, which is more of a physical discipline that is focused around controlled breathing and asanas (postures). But there are many more, and the best part is that you can choose the yoga style that fits your goals and ideals.

3) It can help you achieve personal goals

Yes, yoga can help you do that. But first, you need to get a few things straight.

Before you set out on your yoga quest, it is helpful to align your personal goals with the type of yoga you choose to practice. The question that most people decide between is working towards a lean body figure or meditating to be at peace.

Understand what you want, and then go for it.

4) Try as many postures as you want, without any side-effects

In order to find the right yoga style for you, it would be best to try out every class of yoga at least once, before you decide on a specific type to carry on with. Below are the names of the different disciplines of yoga that are commonly practiced:

While Modi can be wrong about a lot of things, he is not wrong about this. Yoga is a great way to relax your body and ease your mind.

Go ahead, try it and feel the difference yourself!