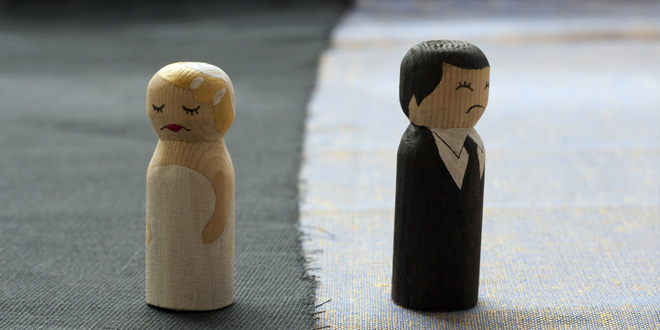 Can divorce or separation be healthy?

When you hear the word ‘divorce,’ a controversial topic in our society, you most likely also hear the high-pitched shriek of a typical aunty commiserating over the event paired with a thinly veiled judgemental tone.

“No one will ever marry you again.”

“Think about what people will say about your family.”

“What about the children?”

The problem with a society that over-glorifies marriage is that it also carries with it the burden of over-arching sacrifice in its untimely death. If you were one of those unlucky souls who managed to marry the absolutely last person you’d ever want to even share an ice cream with (much less sharing a lifetime together), you’ll just have to suck it up and live with it forever or face being ostracised for life.

Don’t get me wrong. I’m not against marriage, but it irks me to see it being treated like such a trivial matter. Marriage is not an easy ballgame; it requires backbreaking compromise, understanding and a good deal of personal adjustments to work. These things are hard enough to muster for our siblings and they share our DNA. Just imagine what it is like for two people who, despite multiple efforts, cannot make it happen – whether its compatibility issues, familial reasons or even abuse.

Let’s look at a very common albeit hypothetical situation for perspective. Mother meets rishta aunty, rishta aunty connects mother to another mother, and the ball gets rolling. The unsuspecting offspring hardly have time to wrap their heads around the concept of wedding-hood before they are flung into it head-first with little to no idea of how to behave in such a situation.

They are bound by obligation and obedience – after all, your parents know what’s best for you, right?

What if they were wrong, and suddenly you found yourself having to live with someone you have absolutely nothing in common with and despite several efforts, still have not managed to find any sort of affection for and can’t stand for even for a minute?

Here’s another scenario. Girl meets boy, boy and girl fall in love and in a fallacious haze of impulsiveness decide they can’t spend their lives without each other. They manage to convince their dubious parents because our society is hard-wired to believe that the only fulfilling goal in life is marriage and they eventually tie the knot. What happens when one year down the lane – the infatuation period, the honeymoon ride comes to a halt and they realize they rushed into it before doing the math?

Yes, some people can manage to work through it and resolve their marital issues, but let’s be honest here. We can’t all have salvageable marriages, and with the sheer multitude of betrothed unions taking place, there’s bound to be a handful of individuals who will have no other choice but to consider separation or divorce as an option for their miserable married life.

Choosing the right partner is paramount to the likelihood of a productive marriage, but we are only human, and humans are not infallible. We all make mistakes. Should we be destined to a lifelong of punishment for these mistakes, or do you think we are worthy enough to be given a second chance to prove ourselves and find better love?

People often talk about the trauma that can come about after divorce or separation, but what about the psychological distress faced by someone forced to live in an unfulfilled union? Depression and anxiety are the most commonly observed problems, but in some extreme situations it can lead to maladaptive behaviour change and cause a dependency on substance abuse and even suicide.

Since people like to bring children into the matter to tip the scales in their favour, let’s also discuss the negative effect on child development under the influence of a parent’s marital distress. Notable developmental, social and functional skills are hampered, which could lead to the development of aggressive acting out and maladaptive emotional coping skills if not resolved early on. Now let us deliberate the possibility that the exacerbation of these issues can be prevented by picking the lesser of the evils – divorce.

While divorce legally annuls a marriage, sometimes separation – for some time, before delving into the finality of the marriage – can also be a positive aspect, if the marriage is beginning to take a wrong turn. It allows both parties to take a break, reassess each other’s values and goals, and try to come to an understanding.

The point is not to glorify divorce or separation, but to recognize its existence as a benefit to escape from a lifetime of damaging and painful experiences. Don’t be selfish and assume that because some people managed to make their marriages work despite the odds, everyone can. People cannot be put into nice predictable molds because everyone has different expectations, personalities and beliefs.

Putting labels on divorce only serves to suffocate poorly functioning familial units, which in turn paves the way for further atrophy in society’s mindset about marriage.

You may be headed for divorce because of housework