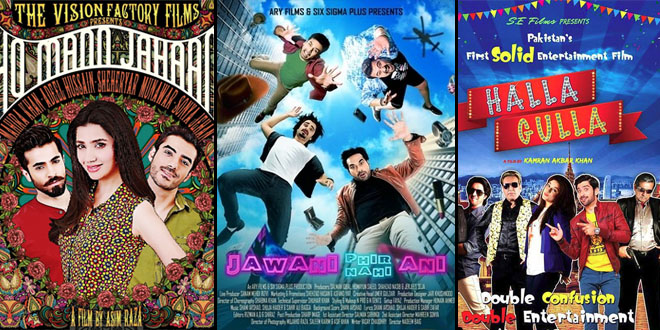 What to expect from Pakistani cinema this Eid

Pakistani cinema lovers have much to be thrilled about this Eidul Azha. Three much awaited movies are set to hit the big screen soon. Nadeem Baig’s directorial Jawani Phir Nahi Aani, Raza’s Ho Mann Jahaan and Karman Akbar Khan’s Halla Gulla are all set to dazzle Pakistani audience this Eid.

The three films appear to have their own allure and genre that would not let you get bored for even a second. Pakistani silver screen is back on track and is consistently barging forward with new and better movies every season.

This one features a renowned and formidable cast, including Humayun Saeed, Hamza Ali Abbasi, Vasay Chaudhry, Ahmed Ali Butt, Jawed Sheikh, Mehwish Hayat, Sohai Ali Abro, Sarwat Gillani, Ayesha Khan, Bushra Ansari and Ismail Tara. On the off chance that you think Jawani Phir Nahi Aani (JPNA) is a Bollywood sham, you are totally wrong. It has different components that make it special and unique in relation to Bollywood movies; the premiere uncovers how the film is distinctive and loaded with entertainment.

You are certain to groove to the addictive catchy beats of the songs in the film, likewise you are surely going to fall in love with the glamorous Sohai Ali Abro and the sexy Mehwish Hayat as they show you their moves on the big screen. JPNA spins around three companions, tired of their stingy wedded lives and irritable wives. By and large, this visual treat leaves you needing for more and will without a doubt pull you to the cinemas this Eidul Azha.

This will be Kamal Akbar Khan’s first contribution to the big screen of Pakistan. Halla Gulla is expected to be a complete entertainer. The director was not happy with individuals contrasting Halla Gulla and Na Maloom Afraad.

“Both the movies are poles apart”, says the director.

The rom-com is prepared to set the stage ablaze. Loaded with satire, drama and romance, Halla Gulla is relied upon to be a complete excitement bundle. The film features Javed Sheik, Ismail Tara, Ghazala Javed, Asim Mehboob, Muneed, Sidra Batool, Ashraf Khan, Zara Gul, Jasmeen, Adil Wadia, Maryam Ansari, Hina Rizvi, Hunain Maniar and Bilal Yousufzai. With this stellar cast, the film is written by Raheela Mushtaq. According to my sources, the film will be having around five songs from which one is sung by our very own Rahat Fateh Ali Khan. We have high hopes from Halla Gulla – fingers crossed.

This movie is principally about the kinship among three lead characters conceived out of shared encounters at the same school and their passion for music. Music is the fundamental topic of the story and there are around nine melodies in the film.

Shahryar Munawar as Arhaan is a hardheaded young fellow from a lower white collar income group. His father needs him to make a better life for himself by getting a degree in business administration. Adeel Hussain as Nadir is a milder individual, a loyal child to high society folks who have incredible desires from their only son. Mahira Khan as Munizeh, as compared to other leads of the film, has been raised without directives, in a creative, artistic and liberal home. She is the most adjusted of the three.

Taking after Asim Raza’s itemized eye and praiseworthy aptitudes of controlling the story, the film likewise includes veteran on-screen characters like Bushra Ansari, Sonya Jehan, Nimra Bucha and the excellent Arshad Mahmud. The film’s music is made by a savvy blend of youthful and old people of the Pakistan music industry, for example, Zeb & Haniya, Atif Aslam, Tina Sani, Abu Muhammad & Fareed Ayaz, Jimmy Khan, Asrar and Faakhir. Major parts of the film are shot in Karachi. Locations like the Frere Hall and IBA were also used during the shoot.

All three movies are set to be blockbusters; wishing the best for the crew and cast of all three films.