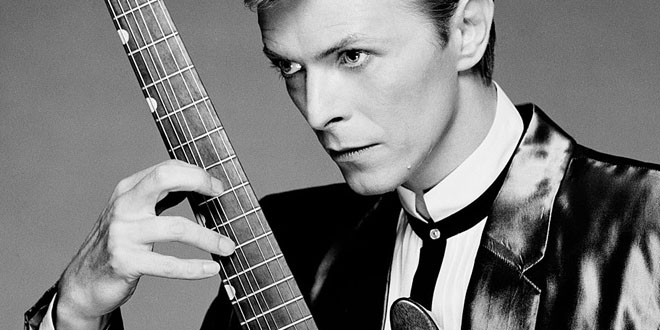 A Tribute To David Bowie

Today, it is the end of an era; the world has lost a beautiful soul loved by millions, David Bowie. The iconic legend and one of the most influential musicians, David Bowie, dies at 69 after battling with cancer for 18 months. Not only was he an extraordinary song-writer but an exceptional actor, painter and fashion personage. The legend released his latest album ‘Blackstar’ on his 69th birthday merely a few days before his death. The album appears to be topping the charts all across UK and the U.S.A. His latest music  video for the song  ‘Lazarus’ brings tears to the eyes of fans worldwide, projecting a severely ‘ill’ Bowie as he lay in bed while the lyrics quote ‘’I’m in heaven’’ establishing the idea that Bowie was perhaps aware he wasn’t going to survive for much longer.

For over decades, proficient pop star David Bowie has displayed enigmatic characteristics while revolutionizing fashion and style bringing idiosyncratic sex appeal to the realms of music. All of this was accomplished because of his androgynous persona as he ambiguously blurred gender-lines especially with his initial hits while attempting to adapt varying personas like his strangely appealing space-man alter-ego ,the orange haired alien ‘ziggy stardust’ followed by The ‘white duke’ persona as the phenomenal fold-rock maestro, further drifting into albums that projected a drug loving eccentric.

Bowies music and physical appeal constantly protruded confused genders. His scintillating identity merits applause primarily because this unconventional parade in no way qualifies as a mere ‘charade’ in attempts of boosting publicity, in fact, the manifestation of this mystifying courage originated from Bowie’s real inner self. During his ‘Berlin years’ Bowie was known be intimately involved with his transgender sweetheart ‘’Romy haag’’. It was the distinctive aura that further highlighted the originality in his music which in turn served to be actively reflect his ideologies and desires.

Bowie always projected an alienated identity, both literally and metaphorically. Preceptor of blending genres, master of reinvention and unprecedented music appeal, Bowie exhibited several stunningly bold guises representing his defiance and rebellion in a manner that allowed him to inherit the reputation of a fearless individual with an insatiable drive to constantly re-establish and breakthrough the traditional standards. He was once asked ‘what do you regard as the lowest depth of misery?’, in his response to the question he said ‘living in fear’. A Brilliant answer indeed.

His unparalleled identity and diverse music allowed him to work in collaboration with several phenomenal music artists and directors including the legendary ‘Queen’, ‘Tina Turner’,the iconic ‘Bauhaus’, rock band ‘Nine inch Nails’ and ‘John Lennon’. He was also rumored to be releasing an album in collaboration with ‘Gorillaz’. Certainly, it would have been a treat to the ears but unfortunately we wouldn’t be granted the privilege to experience that anymore. Bowie has been associated with some ‘cult-classics’and other films some of which were artsy indies while others were quite popular among the masses, he diligently pursued an acting career alongside his successful music career, some of his commendable films include ‘The man who fell to earth’, ‘Labyrinth’, ‘’Ziggy Stardust and the spiders from Mars’ and ‘Merry Christmas Mr. Lawrence’ and most recently Christopher Nolan’s ‘The Prestige’ in the year 2006.

Several David Bowie songs effortlessly made it to the top charts, His major hits include “under pressure’’, ‘’changes’’, ‘’space oddity’’, ‘’Heroes’’, ‘’let’s dance’’ and ‘’fame’’ along with several other commendable tracks that were also used in movies as theme soundtracks, the films include ‘perks of being a wallflower’ and ‘Breakfast club’. David Bowie accomplished a lot beyond imagination at an awfully young age. The world has suffered a great loss bearing his death. The unforeseen tragedy shocked millions of fans across the world causing feelings of distress. Rest in Peace. He will always be remembered.