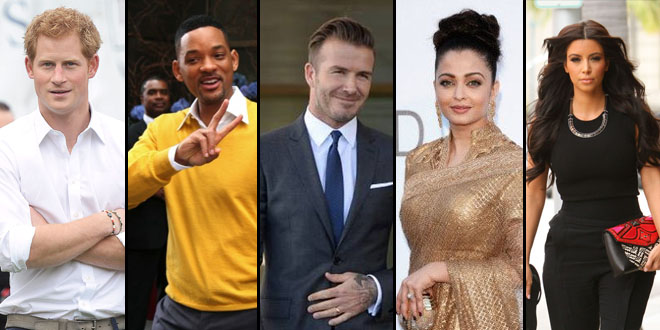 Top 7 most stylish families around the world

Style is something that comes from within… or it can also be passed on from generation to generation in one family. There are many families out there that hit the top-notch of wearing high-fashioned brands effortlessly, whereas there are those that have created them.

Nonetheless, these families are renowned for their style, and have become fashion icons in their own way. These families can easily be recognized just with the hint of their names, as to why they have made their place on my list of the top seven most stylish families around the world.

The Beckham fraternity has a good looking DNA of their own. With that, the family has been voted recently as the most stylish in the world in a poll. David Beckham, a sensational former footballer married off to none other than the 90’s pop star Posh Spice, Victoria Beckham. Beckham, with his almost god-like body and personality, has modeled for top brands such as H&M and Adidas. Of course, his sons wouldn’t be too far from where Daddy is; the eldest, Brooklyn, made his debut in the fashion world in 2014. Romeo, who’s 12, has already checked off Burberry in his modeling career. I wouldn’t be surprised to see the other two, Cruz (9) and the princess Harper (3) to be the next sensations. The Rolling Stone lead vocalist Mick Jagger was one of the world’s hottest pin-ups and style icons in the 60’s and 70’s. With numerous marriages and lovers, his own family has not been behind in carrying his sparkle. He married top model Jerry Hall, to whom he had daughters Elizabeth and Georgia May. The two of them have followed their mother’s lead and have modeled for high class brands such as Lancome and Vivienne Westwood. Famous actor Will Smith and his actress wife Jada went on to carry the Smith name with Jaden, Willow and their half-brother Trey. This family is not only famous but has its own individual style too. Willow is keen on experimenting with her looks and locks which make her have her own limelight. Singers Gwen Stefani and Gavin Rossdale are renowned for their uptown bold funky style. And, as it goes without saying, their kids Zuma and Kingston have followed their footsteps, having their own miniature style statement in public appearances. These four are considered to be the royalty of Bollywood and are known for their w in subtle style. Actress Aishwarya Rai Bachchan, former Miss World and brand ambassador to L’Oréal, pairs up with hubby Abhishek on the red carpet at Cannes and sets the entire fashion world on fire. Whereas the legendary Amitabh Bachchan has made his silver beard his signature and wife Jaya carries the classical Indian touch in her iconic style. Coming to the family which is actually a royalty in the world, their class of fashion is my personal favorite. Having the Duchess of Cambridge, Kate Middleton added on to the family has made the British Royal Family voted among the top stylish families of the world. Her sense of high-profile style makes her an icon to the world. Little Prince George has also made his way to being a prince of fashion, as his outfits sell online almost immediately. This family of course could never be left behind. With the hype that is created everywhere on social media with the Kardashians, it was impossible for them to not reach this list. This is probably the most-talked about family on TV, with one common thing running in the family; their flair in style. The sisters Kim, Kourtney and Khloe all have their hands on their own fashion lines, while Kendall Jenner is a top model venturing into acting and Kylie is coming to enter the fashion industry herself.