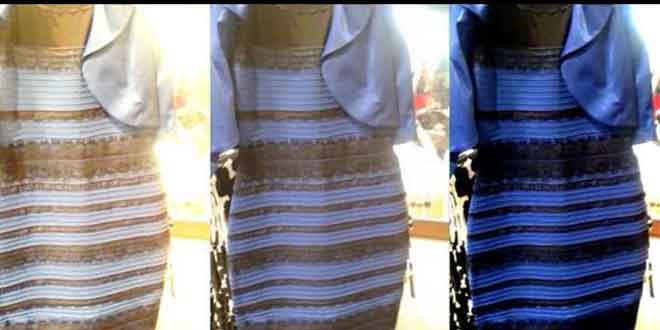 #TheDress Debate: What Color Do You See?

The world has engaged in a debate over a dress and polarized the cyber space since the picture of a striped dress has been posted on the internet. The picture was posted on the image-sharing website Tumblr by a user named “Swiked”. What sparked the debate is the color of the dress as many people see the dress as gold and white in color and others have declared that the dress, to be black and blue. It has been one of the leading trends on Facebook, Twitter, YouTube and other social websites. A lot of people have found it affront to rationalism because they consider it as an assault to what they think is the truth. Celebrities across the world have engaged in the debate over the color of the dress reflecting its hype and importance for the viewers.

A lot of scientific discourse has emerged in response to the dress which contributes in providing a logical explanation which would conclude the debate over the dress. When the light enters through the lens, different wavelengths corresponds the light to different colors.  Our eyes have retinas that interpret the color. The retina has two types of photoreceptors, rods and cones; the cone sees the color and the rod see shade, like black white and gray. The cones work when there is enough light. The rods respond and the fabric will be seen as a shade (white) if there is not enough light and the cones are not responding. Others may see it as blue if their cones are responsive and there is not dim lighting.

The basic scientific theory states that our retina cones are function more when there is enough light and we see the dress as black and blue because of subtractive mixing. On the other hand, our eyes do not work in dim light so our retinas’ rods sees white causing additive mixing of green and red to make it look like gold. In spite of the logical explanations and relevant examples the fabric has gathered the attention of people and is one of the trends that will be discussed in days to come.

Pakistan wasn’t far behind on the debate and participated in the internet war over the #TheDress. People were astounded by the contradiction that the color of the dress poses. They actively participated in the debate and tried to prove their point through explanations backed by logic. Others supported their judgment by multiple examples in trying to convince the other side. However most of the people were left amazed and decided to discuss it with other people and share their conclusion about the dress rather than to search and provide a rational explanation. Most of them prefer to enjoy reading this trend and relate it with other subjects to carve out the humorous aspect in this debate.

So the big question is: What color do you see? Let HTV know in the comments!