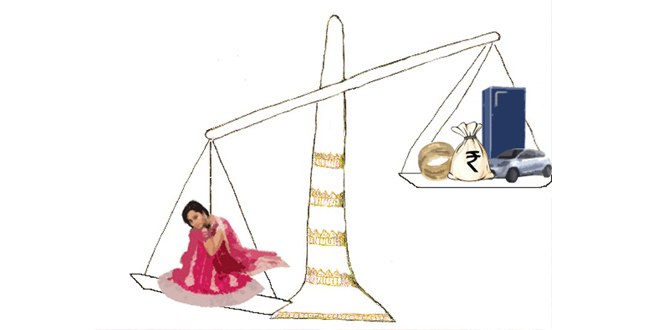 The plague of dowry in Pakistan

The concept of marriage is a complicated one to grasp, for both men and women. The concept differentiates for various ethnicities around the globe. However, when I look at marriage, I feel that it should be a bond between two people who have chosen one another to be companions for the rest of their lives.

Marriage shouldn’t have to come with complicated rules or obligations before or after the main say of “I do’s”. It should be a rejoicing event for both the families of the bride and groom. But, that is not the case, for there is this one complication or factor that has always marred the celebratory feel of weddings, and that is dowry.

Both families consider many factors when it comes to marriage, be it arranged or love – looks, education, wealth, family background and the likes. Although, the top priority should be, to look if your daughter/son is comfortable with the idea of the proposal you behold in front of them. But this is often hindered with the presence of dowry in Pakistan.

Dowry, in my opinion, is an added burden which families willing take, without understanding how it contaminates the positive idea of marriage. There will be people out there that will call my definition outrageous but, for me this is how an independent girl from the 21st century sees it. I believe that handing your daughter away – a girl you have raised and loved for years – should be more than enough of a factor than to bewilder yourself with materialistic needs.

I find it despicable as to how easily a family expects that the girl will bring with her furniture for her own room, crockery, TV set, and what not. I mean does the guy not sleep on a bed before her entrance in his life? Or does the family not eat in plates and have a TV to watch from? Does this seem sensible?

Dowry in Pakistan and India is very common. Dowry is something that is considered first and foremost in some families. Many films and dramas have even been made especially in India over this matter. A recent one particularly about dowry awareness with a sarcastic touch was Dawat-e-Ishq.

Apparently, a law has been made in India against dowry. Now that is what I call advancement in civilized people. I loved how they showed the realities of what people think of their son as a commodity to sell, and how they showed girls to have a right to speak against this ludicrous factor. Many marriages are held or withdrawn at the day of the wedding because somehow, the girl’s family is not able to meet the required list of items the groom’s family has asked.

A girl is not made up for sale in this world. She should be welcomed whole heartedly by her new family rather than be mocked for bringing in lesser things as her dowry. I have always been against dowries, not because it is only ridiculous as a consideration but because of the strong realities the middle class families have to struggle with. Does the groom’s family for once ponder to what stress the girl’s family has to go through just to have their daughter married?

I doubt they do.

I especially would like to call out to those families who have their own daughter to marry, what will you give when her time comes?

disadvantages of dowrydowry causes on marriagesdowry in Pakistandowry negatives on marriage life.dowry side effects on girl’s lifegirl family struggle for marriage
Comments
Loading...
Stay With Us