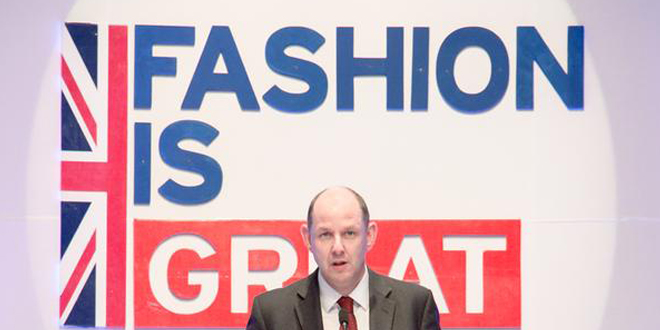 The ten day long festival, organized in association with the Dolmen and Avari Groups, will be a chance to showcase British mastery in design and fashion, retail, music, food, culture and creativity under the UK Government’s “Britain is Great” crusade.

British High Commissioner of Pakistan had particularly flown down to Karachi from Islamabad to attend the show. “This is not the first time such a merger is occurring. There have been numerous effective Pakistani Fashion Weeks in London. Such a merger is valuable for both the nations,” Mr. Barton said.

Debenhams, Clarks, Next, FHS by Hub, Toni&Guy and Accessorize held hands with Gul Ahmed, Gulabo, Deepak Perwani and Jafferjees. Pakistani female models with perfect figures and ruddy pouts intensely ventured onto the ramp in pumps and high heels, impressing everyone with their beauty and charm.

Known models like Fayezah Ansari, Fouzia Aman and Sadaf Kanwal were there to dazzle all with their ramp walks while Sabeeka Imam stole the evening with her perfect walk and alluring looks. The evening was full of style and glamour. Well known fashion designers and media personalities like Nomi Ansari and Tapu Javeri were there to add to the grandness of the event.

British Deputy High Commissioner John Tucknott said that Pakistani fashion culture is not the same as UK fashion of course, but it doesn’t mean it can’t fit in the UK. “We have around 4 to 5 million South Asians in the UK. What sells in Pakistan sells in the UK as well,” said Mr. Tucknott.

UK Trade Champion Baroness Nosheena Mobarik CBE represented the UK Government at the event and said, “Pakistan and UK have solid chronicled ties. The more interaction between both the nations the more trade and investment will take place.”

The British Council will be introducing a ‘pop-up’ library at Dolmen Mall next year, giving a sneak peak of the new British Council libraries that will open in Lahore and Karachi. In addition there will be various instructive and social occasions to take part in for the youth of Pakistan.

For all the foodies, the celebration will offer British cuisine at Avari Towers in Karachi from October 5 to 10, where famous British gourmet specialists will be cooking their recipes.

Such events should happen more often in Pakistan. Pakistan seems to be back on track and such events like these will open more gates for the country to showcase its talent, culture, creativity all over the world. Both countries are appreciated by initiating this grand merger.

Dolmen Mall owner Nadeem Riaz said, “We are glad to band together with the British High Commission for the celebration which gives an astounding chance to Pakistani and British brands to showcase themselves under one rooftop.”