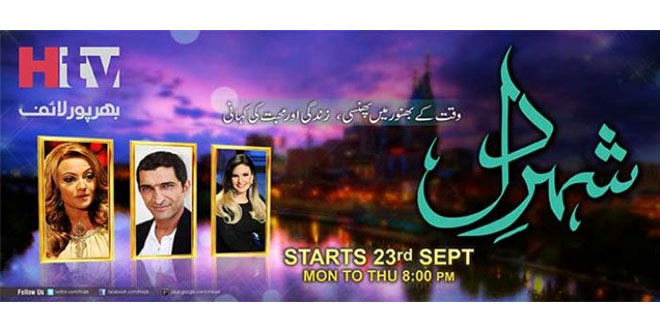 If you are a Grey’s Anatomy fan and enjoy dubbed foreign dramas, then Shehr-e-Dil is going to be a treat for you. For everyone else, it’ll be the next big television sensation, ready to take you by storm.

Set in the backdrop of medical intrigue and hospital cases, we find Shehr-e-Dil featuring doctors and medical staff members coming together to solve their medical as well as personal dilemmas, and working with each other like a well-oiled clock.

Shehr-e-Dil is a human-interest drama in all its aspects, which is bound to make people laugh and cry, put them in shock, excite their senses and thrill their nerves. Personal issues, dramatic interactions, strewn with medical mysteries and doctor-patient relationships, this serial will be a blast of emotions.

Their hopes, successes and failures, and the moments of life and death they face every day bring frustrations, smiles, tears, and laughs. From the importance of a decision made within seconds, to the difficulty of making life-altering choices, this show has it all. From the obvious emotions of a patient’s family to the hidden emotions of the hospital’s family, this show will play the audience’s hearts and take their breaths away.

Apart from the stories, dramatic arcs and the show’s main characters, there is also the drama surrounding patients who come into the hospital. Each patient has a unique story, which often allows the characters to become deeply involved in the lives of their patients.

Dr Ramy (Amr Wakeed) – A man with a strong passion for his work, his main goal in life is to save lives. With a lighter side to his personality, he shows his love for music. He plays the guitar badly, but is convinced he is very good. Due to his dedication to his profession, he ignores his wife, Salma, but is clearly torn by his dilemma.

Dr Khaled (Mahmoud) – A single man who had a tough childhood. Dr Khaled was brought up in the street of a low-class neighborhood which made him tough. This has also made him edgy, impulsive and sometimes even rebellious, although deep down he is a very warm-hearted person.

Dr Youmna (Boshra) – She is the youngest doctor, and she has a past. She has a strong romantic interest in Dr Amr who doesn’t return her feelings but she is hopeful that some day he will want her.

Dr Ibrahim (Amar Chalak) – A Lebanese doctor residing in Cairo, Dr Ibrahim is an exceptionally skilled doctor who gained his skills working under very difficult conditions in Beirut. He faces some resistance when he first joins the hospital staff. Being an outsider at first, it takes his strong character and his high expertise as a doctor to finally prove to everyone that he deserves to be here.

Dr Moataz (Hesham Salem) – Although a brilliant doctor, he suffers a nervous breakdown after losing a young patient during surgery, which causes him to lose his courage as a doctor and is now thinking of leaving medicine.

Dr Amr (Amir Karara) – A young, handsome doctor who comes from an upper class background, Dr Amr is thought to be the hospital’s top surgeon. He is too confident about his work and has a bit of an ego.