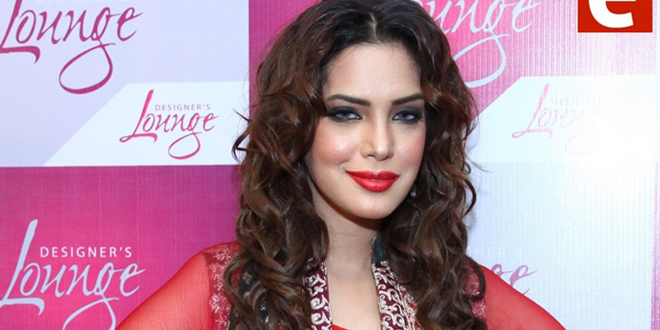 She is bold and ambitious, beautiful and magical; she recognizes what she needs and is all set to be the next big fashion icon in Pakistan. She is Saimaa Azhar. Saimaa has recently gained tremendous fame in the fashion world and appears to have a promising future as a model. Recently Saimaa visited India to represent Pakistan’s fashion industry in Shaan-e-Pakistan, held in Delhi.

Saimaa ruled the ramp and surprised everybody with her amazing looks and sense of style. Everything was going smooth and fine until the poor model got encompassed by the Indian media where she spoke to some Indian daily and things went wrong. The Indian media reported saying that the Pakistani model does not like Pakistan and communicated her wish to stay back in India.

As indicated by the Indian media, Saimaa said:

“I feel main wahan [Pakistan] galti se drop ho gayi hoon, I should be in India. My mother is originally from Lucknow and my father is from Hardoi in UP. So, my family roots are in Uttar Pardesh,” according to the Times of India.

However, it is still in question if this is yellow journalism being drilled by the Indian media or is it reality. To find out, I directly spoke to Saimaa, and guess what? She denied any such statement to the Indian media, more over she accused Indian media for publishing a “chopped version” of her Interview. Saima said:

“What’s written is a chopped version of my interview. I undoubtedly love Pakistan and happily give my life for Pakistan. It’s just my father who migrated to Pakistan was from India. I was born here, in Pakistan. By birth my father is an Indian so my roots belong to India; that’s the reason I love visiting it; nothing else.”

Here Saimaa clearly indicates how much she loves Pakistan. Her statement reveals the truth. The masters of yellow journalism, the Indian media, should now find new and better ways to twist and turn stories or should stop such shameful acts totally. This is not the first time the Indian media is being exposed for publishing half truths. Saimaa also said:

“When we are being interviewed, obviously it ends up being long and as it’s not possible to write everything up, the media officials just pick up some lines and ignore the whole story.”

Being a responsible journalist does not allow you to publish some words and miss out the rest. The meaning and context of a statement can easily be changed if some words are picked while the rest are ignored.

Talking about Veena Malik, Saimaa confirmed that she apologised to the Indian media on behalf of people like Veena as they bring shame to our country with their inappropriate acts.

“I don’t want to talk about girls like Veena Malik. I should be saying sorry to India on behalf of these girls. What she did was not appreciable,” she said.

Having had a decent measure of involvement in the fashion industry, Saimaa corrected all misinterpretations individuals may hold about the Pakistani fashion industry. Saimaa demonstrated to the world an alternate and more extensive picture of Pakistan and its fashion industry. It is to be remembered that numerous Pakistani stars are working in Bollywood yet nobody has ever coveted to live there permanently.