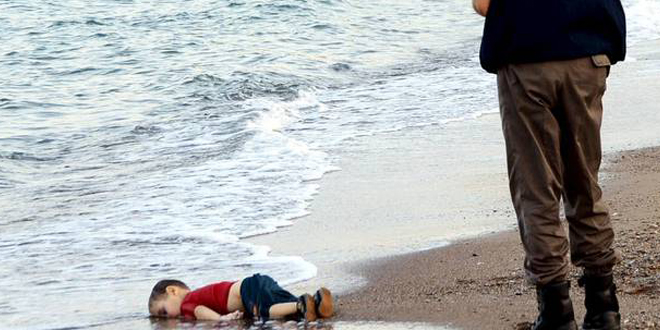 Refugee problems: The edge of humanity

The tragic picture of the 3 year-old Syrian refugee boy lying on the shore of Turkey is going to haunt humanity for many years to come. Before this picture became viral on social media, many people, at least in Pakistan, had no idea of the refugee crisis in Syria.

I was in London a few days’ ago when I first came across news of displaced people attempting to gain entry into Western Europe, particularly Germany. However, I couldn’t keep up with the news, as I was traveling. All I believed was that they must be from Greece or another nation whose economy is as compounded as Greece. In any case, when I came back home and began to watch the news again, I realized that the refugees were from Syria.

The feeling of losing innocent souls has driven out a very important sight of this incident: why have not any of the Gulf States lent their hand in saving these lives? There are many Middle East countries that could provide help, but we are witnessing a pin drop silence from their end.

The toughest part in one’s life is to uproot yourself and leave your mother soil, and much strife within the country has made millions of Syrians refugees. These Syrians have made one of their toughest decisions to change a life of hardship and have reached out to any country that would welcome them, for a somewhat stable life.

But, they have better choices nearby – Saudi Arabia, Kuwait, Qatar, Oman, Jordan, and UAE or maybe even Iran, and still many have chosen Europe. The point to be focused on is that there are at least 50 recognized Muslim countries in the world.

There are 4 million Syrians who are currently attempting to escape demise in Syria. Numerous are stranded, lost, enduring or effectively dead. These are called “War Refugees” not “Transients.” Millions are, as of now, living in camps and tents in Jordan, Lebanon, Turkey, and Greece, and thousands more are attempting to reach Europe on the grounds that that’s their last hope.

To Europeans who are turning them away: they are not after your duty cash or your employments; they are subsequent to protecting their kids and families from prominent demise.

These are historical moments in the world, in which the next generation will read about who gave a lending hand to these innocent humans and which countries turned them away. I’m sure nature mourned the tragic death of this boy and marine animals are cursing humanity, but sadly there is no Gulf country to help them. The refugees are struggling between life and death, but there seems to be no sight of light for them – just darkness.

Why are we so quiet? Like every other tragedy, this also needs to be condemned. Petitions should be signed by people to help these souls breathe back into life. It’s not about a cause or an unusual statement but about millions of those lives who are in danger.

Looking at the plight of Syrian refugees, I wonder how grateful Afghans and Kashmiris are to Pakistan, as Pakistan is home to the world’s largest concentration of refugees since the 80s, yet millions of Syrian souls do not have any shoulder to lean on.

It’s time to stand up for humanity. We should stop relaying on our so called politician and make them understand that Syrians are not migrants but refugees – migrants search for economical well being, but refuges uproot for survival. If that image of little Aylan Kurdi doesn’t melt your heart, I don’t know what else will.

I would, however, like to thank all the European countries who have helped these people and although we have lost Aylan, his mother and 5 year-old brother, there are many other people who need to be rescued and our only hope relies upon Europe.

About the author: Sheharyar Ali is a student of journalism from the University of Karachi.