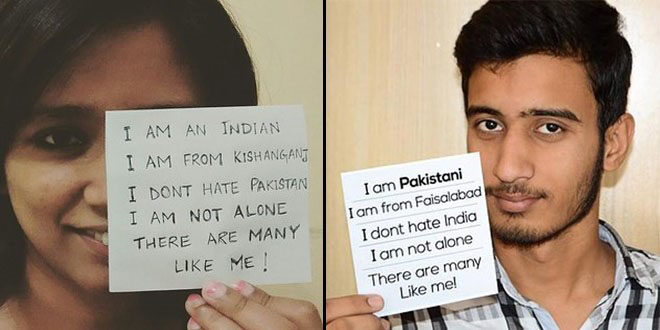 #ProfileForPeace is a hashtag crusade that has been appreciated by nationals of both India and Pakistan. The campaign has won millions of hearts from both the countries and represents the mindset of this modern generation.

The hashtag crusade circulated around the web overnight with a huge number of Indians from Kerala to Kashmir and Pakistanis from Lahore to Karachi and also those living in the US, UK and UAE changing their profile pictures to one with a short note that says where they are from, that they don’t detest one another and are just being isolated by hate politics.

Recent happenings in India were a total disappointment. The extremist Shiv Sena of India did nothing but give the country a bad image globally.

Acting superior, rubbing black paint on a Muslim’s face, burning a Hindu and titling him as a low cast, breaking into BCCI’s head office in Mumbai to stop the meeting that was scheduled with the PCB officials, throwing bottles at the South African cricket team that is currently playing in India and threatening Pakistani celebrities and defining boundaries for art just shows how narrow minded or rather uneducated the extremist organization is.

I believe our ancestors were more inclined towards war for they couldn’t move beyond the terrible occurrences of partition. But our generation certainly is more levelheaded when it’s about dealing with such conditions. We have mastered the craft of moving forward and we understand that war is almost impossible for these two nuclear forces. War does not bring greatness.

It just shows how bad we are at communication. The inconveniences of Syrian refugees say a lot of the unalterable harm that war brings. Considering both these “adversary” nations are nuclear powers, even the thought of war would be disastrous.

Here are some of the many tweets and posts that flooded social media.

Response from Pak for #ProfileForPeace
Politicians from both sides. Take that
Thx to @TweetOfRam for starting this. pic.twitter.com/8vKK3AFcEM

Hundreds & thousands of tweets frm across d globe, every hour proves there is more #Love on our planet, go for it! pic.twitter.com/oc7byF0xsl

The main way out of this is correspondence and communication. There has been an absence of communication amongst individuals of these two nations otherwise there are hardly any differences apart from religion. We don’t travel much and when we do we are issued visa to only some locations. Despite the fact that Ram Subramanian, who began this crusade (ProfileforPeace) had really intended to take a stand in opposition to the wrong picture of India that these occurrences had made, the interest among individuals of both these nations is the motivation behind why I trust this #ProfileForPeace campaign really happened and developed so enormous.

“One morning I just woke up and saw this tweet from author Vishal Dadlani who had tweeted supporting Ram’s #ProfileForPeace activity that he being an Indian did not hate Pakistan. This made it evident that every Indian is not the same. When I first saw this tweet the first thing I did even before breakfast was to bring a selfie with a comparable message and put it on online networking. I just implied it to be a nice thought of gratefulness towards those from India battling against radicalism there.

The motivation behind why supporters thought of “I do not hate” rather than “I love” was on the grounds that we don’t have to love one another to live in peace. Tolerating each other’s presence is the key to peace and prosperity in sub continent”, says Shumaila Hussain, one of those Pakistanis who started this campaign from this side of the border.

We understand that we have intense issues with one another; however, even those don’t legitimize war. Arrangements and dialogue is the main path forward and to make authority of both the nations understand this we expected to convey this message loud and clear that we need peace no matter what.

I don’t comprehend why it is hard for pioneers of these two nations to see that Pakistan and India split up around 70 years back and it should’ve been sufficient to say that this isn’t working; we can’t be one again and we need to stop obsessing over each other. This would work for our own betterment.