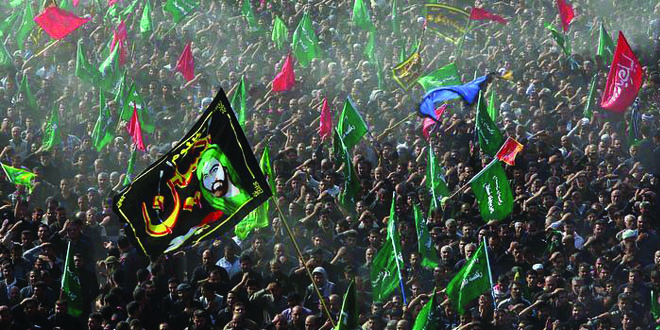 The day of Ashura reminds every believing Muslim in the ultimate sacrifice the grandson of Prophet Muhammad (pbuh) gave for the sake of Allah, in order to protect Islam. It is zealously commemorated because of the selflessness Hazrat Hussain (RA) showed in order to protect an order set by his grandfather in the name of Allah (swt).

The day of Ashura is the day when every Shiite Muslim walks down memory lane, reviews and analyses the events of Karbala; the misery, pain, disappointments, callousness and the bravery it encapsulates, keeping in line with the promise made by Hazrat Zainab (RA), daughter of Hazrat Ali (RA) and sister of Hazrat Hussain (RA).

For many, however, this day is seen with confusion. Many people I meet imagine Ashura as a time when Muslims indulge in self-harm; an act frowned upon by many, making mattam a tabooed act. Some view it as a day where there will predictably be a huge traffic jam, blocked roads and disturbed communication. But from the view point of a practicing believing Shia, this day is a testimony to the Prophet’s grandson; that they would have stood alongside him when he was in the line of fire.

It is also simultaneously considered by the Shias a demonstration to their Imam of time, that when he reappears, they will be on his side. This is precisely why every julus ends with the chant, ‘Labaik ya Hussain’ – we are here Hussain.

With passing time and tradition, Muharram has seen many changes. Like my father used to tell me, on the day of Muharram 10th, they would not iron their clothes, put some sand on their heads, open the first two buttons of their shirts to reveal their chests and move with the procession in a manner as they probably would have been while in Karbala, battling alongside their Imam.

From what I remember, there was a time when Muharram 10th julus or any julus, in fact, never interfered with the daily lives of the people. The roads were never blocked and shops would be open all the time. In fact, I recall buying drinks while moving in the julus, in order to stay hydrated. Today, however, the julus has started to resemble a curfew. I understand that security reasons have forced people to shut everything down, but this shows a lacking on the government’s side, not in the ritual. The ritual was always pure and considerate of non-Shiite people, and still is in essence.

Today’s Ashura still has the same recreation of the past, from alams, jhulas, sabils, horses (symbolic Duldul-Zuljana) to groups of matamis reciting, beating their chests and crying. However, modern times are different in subtlety. For example, the increasing julus population is somehow taking the symbolism literally. Many people treat symbols like horses etc as the real deal. As if these symbols are their one connection with God (a waseela).

Similarly, a lot of Muharram’s rituals have been commercialized. Noha reciters and matamis have become rather professionals. As their numbers increase, so do their demands in terms of monetary or equivalent returns. From spiritually motivated to culturally derived, the essence of these traditions is transitioning.

Inarguably, this still does not have any bearing on the love and connection Shiites have for their Imam and the Ahl-e-bait. From the time of my forefathers till today, the security concerns have increased dramatically. Interestingly, so has the participation rate. While numerous attacks have scarred the souls of most of these people, made their sustenance difficult and their struggles of daily life more intense, Ashura has given people more reasons to connect than disconnect.

During the whole of Muharram, especially Ashura, the number of hungry people in Pakistan goes down and becomes negligible. The in-group identity that this day has created has brought more hearts closer, even when the loved ones have gone far, far away. The community has developed a unique identity which is publically revered, even if privately disliked.

As one of my friends says, Ashura is the symbol of commitment, sincerity and dedication to the holy grails of Islam; it is an example of unity, obligation and genuineness of the Shiite community. This can be testified by the increasing number of pilgrims visiting Karbala, Iraq, to express their sentiments on the day of Ashura.

The events of Karbala have touched many ideologist, writers and poets. It is seen as a perfect example of conduct, duty and dedication shown by Hazrat Hussain (RA) and continues to inspire his followers. It is unique in its method and as it connects all the channels of faith of a Muslim, it is also a distinctive feature of their culture.