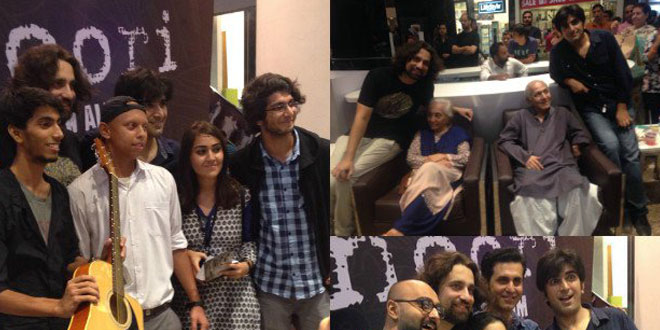 Noori returns after a decade

Following a 10-year hiatus, Noori returns to the center stage of Pakistani rock music by releasing their new music album Begum Gul Bakaoli Sarfarosh (BGBS). After visiting Lahore and Islamabad, the band arrived in Karachi to meet their fans and market their new music.

The album launch – open for all – was held at the Ocean Mall Karachi. The response was wonderful. Massive crowds lined up to purchase their CD and get them autographed by Ali Noor and Ali Hamza.

Mirza (MO): You have made your comeback after 10 years and still the fan following seems to be unchanged; what would you want to say about Karachi’s welcoming response to your music?

Ali Noor (AN): I am finally satisfied. We worked on this album day and night for 10 years and today I can finally say it was all worth it. We feel amazing.

MO: Noori has a signature genre. Is there anything different in this album for the fans?

Ali Hamza (AH): We have new music and new songs for all our fans and music lovers out there. We have a lot to share with you all and we want to interact with all our fans and followers through our songs. It is not just going to be a listening experience this time; we are looking forward to making it an interactive one. MO: Should we be expecting concerts from Noori in Karachi any time soon?

AN: Karachi won’t be able to handle us this time. We have planned loads of concerts to rock you all. Get ready Karachi. I personally hope that individuals some day would really “purchase” music CDs, go to concerts, gigs and so on. Due to piracy and theft, music sales in Pakistan have crashed badly and due to security concerns, we hardly have any concerts. Be that as it may, in these tragic times of theft and absence of live concerts, Noori has still adhered to its roots and attempted to give the Pakistani music scene yet another reminder with Begum Gul Bakaoli Sarfarosh.

AH: As per now, we have no music industry; we have a music scene that I would love to see grow big into an industry. In a proper music industry, specialists operate and there is a proper channel for everything. Currently, the artist writes, plays, produces and does everything for his/her album and gets nothing in return due to lack of proper setup. There are many things that need to evolve before we turn into a music industry. Noori registered a prominent place in Pakistan’s music scene from the day they launched their rock band in 1996. The band resounded with creative energy of a generation that was in search of cool new rock stars to gaze upward to. The way that their music was socially significant and politically charged assisted them in being who they are today. Noori’s ascent to the top has been checked by various breaks and difficulties but they never stopped making music as such.

Both the Noori brothers and I are hopeful for a time when Pakistan goes back to the roots of being able to interact with fans at album launches, sell actual CDs and hold tours of musical ear-gasm concerts.

Back in the spotlight following a nonappearance of 10 years, the band is all set to give its enthusiastic audience a genuine Noori sound and feel. Their new album – BGBS – is out. Grab your CD now or head on over to Patari to know what rock music is.