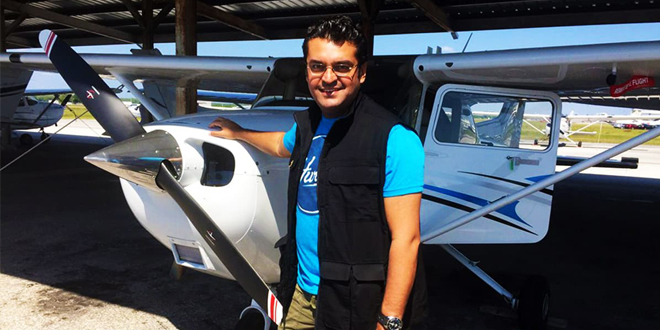 Mission Parwaaz: In conversation with Fakhr-e-Alam

They say if you can dream it, you can do it; Fakhr-e-Alam firmly puts stock in this. Pursuing his childhood dream to be a pilot, Alam as of late procured a private pilot permit from the United States of America.

Alam has voiced his yearning to make a unique world record – fly far and wide around the globe with the slightest flying experience. To add more to his bucket, Alam is a performing artist as well as a vocalist, VJ and TV show host. He has been a noticeable media identity especially after making massive contributions for the earth quake casualties in 2005. Alam also looks after the Sindh Censorship Board which again makes him an all rounder.

Talking to HTV in an exclusive interview, the Pakistani celebrity revealed his love and passion for aircraft and his most recent dare to travel around the globe. Titled ‘Mission Parwaaz’, the TV host spoke of his motivation behind this voyage.

He discussed how being a pilot was his childhood dream and since then he wanted to fly and do something for his country. As indicated by Alam, Pakistan does not have its name in the general aviation history and he wants to be the one to set this record for his country.

What is Mission Parwaaz?

Fakhr-e-Alam (FA): Mission Parwaaz is basically something I am working on to get Pakistan a world record in the field of aeronautics or aviation. If I’ll be successful, Pakistan will receive its first ever world record that would belong to the aviation department.

This is also my personal ambition, if I am able to do this then obviously my name will be coined as the first Pakistani to set a world aviation record and that is something that would mean a lot to me. I want Pakistan’s name and its flag to reach every corner of the world.

Tell us something about the aircraft you are planning to travel in.

FA: It’s a turbo prop plane with a top speed of around 130 nautical miles. It’s a small plane with only four seats – two for the pilots and two for passengers. We will remove the passenger seats and replace them with auxiliary tanks.

Up till now, how many countries have permitted you to fly over them?

FA: We are still in process of getting permissions. Actually, we also have to observe the weather conditions of all the places before giving the respective authorities any specific timeframe. We have the general permission but we need to be more spot-on with details, so we are working on it.

Also my plane has got November Registration which is basically linked with America so from most of the countries, we get permissions easily. The only thing of concern is the landing time; we need to be accurate with all our calculations so that we are not stopped from landing due to traffic as that would consume our time and fuel, obviously.

What route will you be taking?

FA: I will start my journey from Orlando, Florida, from where I’ll head north to New York, Toronto, and Anchorage and further to North Atlantic crossing Iceland and Greenland to enter Europe.

Then I’ll go down to North Africa and the Middle East from where I will enter Pakistan to travel from China to Bangladesh, Singapore, Indonesia and Australia. Following this track, I’ll cross the Pacific to halt my journey into mainland America.

Why are you not flying over India?

FA: Being precise, I can’t trust India. You never know what is on their mind. They can issue you a visa and then when the final day is there they might cancel it. I am not in any mood to counter such problems.

I have not even tried to contact any one from India because I don’t want to take this risk. They are unprofessional. We are a peaceful country and we want good healthy relations with India but this cannot be one-sided all the time.

Do you have any message to your fans and country?

FA: This is not an easy mission; just remember me in your prayers. I am going to get this for Pakistan, do pray for me.

In 2005, when the earthquake hit several areas of Pakistan, our Air Force took up challenging aviation missions which inspired Alam a lot. Ever since then, he too had a desire to go on a mission and mark Pakistan’s name in history of flying solo. Alam plans to start this journey in early 2016.

We wish him good luck for this venture.