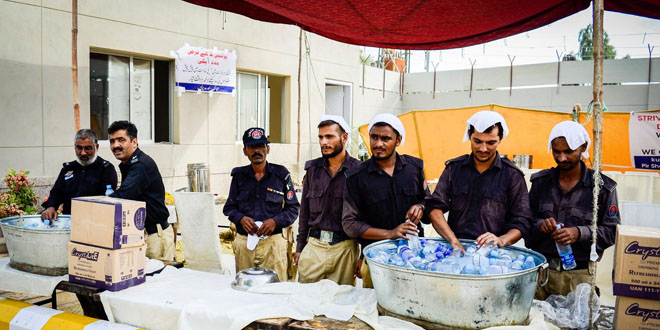 “Life is Cheap” at Hospitals of Karachi

I recently drove down to Jinnah Hospital Karachi and was stunned to see the conditions there. The emergency department was jam packed with no beds available, individuals were sleeping and resting on the floor, and seats and benches were taken over by small homeless families. There were patients hurrying in with different casualties and sharing beds with different patients, presumably even sharing their ailments. There was mismanagement all over. Jinnah Hospital’s emergency was despicable. There was no senior specialist doctor available and the medical students as opposed to giving time and importance to their patients were more interested in tattling and giggling with their companions and associates.

It is nearly impossible to change the destiny of the heat wave victims who rely on government hospitals to spare their lives. Recently, I visited a few hospitals in Karachi and the state of those healing centers and the quality of the care provided to the patients was disgraceful. The overall health framework in Jinnah Hospital, particularly, made my heart sink.

There was no power (electricity) and regrettably, a substantial number of bugs, cats and wild dogs were wandering about in the wards erratically. The awful stench from the toilets could be noticed till the furthest finishes of the passage, and to feel that this is a hospital where cleanliness and giving health awareness and care is the essential center – it was profoundly baffling.

I wanted to meet the on duty specialist to ask about what was going on yet he was fast asleep on a stretcher inside a ventilated room. I rehash, the on call doctor was resting in an air conditioned room while his patients were dying due to heat strokes in the scorching heat outside! This served as an impetus to empower my repugnance and outrage.

Where the Sindh government appears to be taking part in their typical talk and playing the blame game, the responsibility of helping the heatstroke casualties has been taken up by NGO’s, students of different colleges, Sindh Police and Pakistan Army. I was stunned to hear individuals whining about the political parties of the city dispersing water bottles and sustenance to just their friends and family members and overlooked the real victims. No one but animals can be this merciless.

The current year’s heat wave has clashed with the start of the heavenly month of Ramzan. It is an extreme circumstance to handle, it is disturbing, yet Pakistanis appear to be determined and centered around battling back on this natural calamity.

“Someone from one of these political parties dies and they shut down the city. This is an emergency and hundreds of people have died because of this heat wave. Shut down the city and tell people to stay indoors. Now is the time! Let’s not forget our pets too, keep them indoors and keep water outside for the birds.”

“The damage is done but we can help the situation by inculcating the habit of planting trees in ourselves and our coming generations.”

“I request people to stay safe, avoid direct sunlight and keep yourself hydrated. For people working outside and fasting, try spending as much time as possible in shelter.”

“I’m a firm believer that we need more trees. The water mafia in Karachi needs to be clamped and canned. People in the Government need to stop acting like whiny kids throwing blame on other factors and own up to their responsibilities. The Government needs to understand that THEY are servants of the public – not the other way round. All of Pakistan needs electricity, water, security, safety, education, jobs and most of all respect! While most people who died were suffering from drug addiction, there were those who were old and fasting. There is absolutely no reason for old and poor people to fast in a poor country where the temperature is hitting 50 degrees. All of those who have died have been disrespected and nobody in the government cares. That is the biggest misfortune of Pakistan. Full marks are given to the good caring citizens of Karachi who have been helping. We need a disaster management squad.”

“It’s sad to see so many people dying due to the heat wave. Whom to blame? I won’t comment on it but the way our population is growing we must step up and take measures to avoid catastrophes and loss of human life.”

“The heat wave in Pakistan has been devastating. I can’t even imagine having to go through that especially during the month of Ramadan while fasting. May God be with them. May time pass by these unfortunate circumstances.”

Private hospitals are beyond reach to quite a few people and this abandons them with no choice but to put their in the lives in hands of these government hospitals. The fate of the poor is the main thing in question while the rich keep on getting richer and enjoy benefits.

We may have overlooked, but we shouldn’t forget “what goes around comes around!”