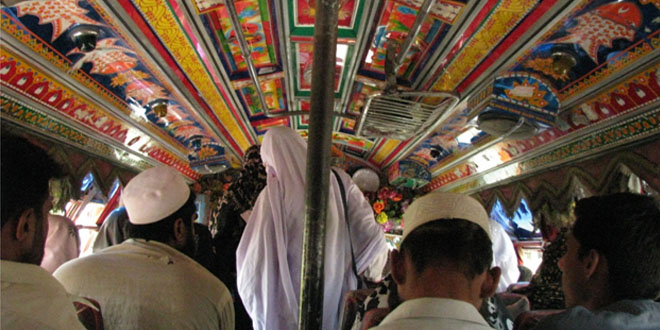 How horrible could long commutes be?

Long commutes are horrible and we know that. I have been commuting for three hours a day in either rickshaws or jam-packed public buses for more than a year. It seemed fun at first, tolerable later, but eventually it became pathetic.

I did a lot of sleeping in the bus, at times standing up, waking up to see people laughing and at times finding my mobile underneath the seat – it was my luck I didn’t lose anything.

Recently, after a good session with a senior at my work place, I decided to go through some studies. I figured that many of the health problems I was facing were most likely reasons of my long hours of travel in a disturbed environment and with distorted sleep – maybe this is why I have not seen veteran commuters sleeping in buses.

As per one research conducted, although in the opposite side of the world, commuters in Sweden face a lot of problems similar to Pakistan. The study focuses on the effects of commuting on human health and happiness. The study was conducted on commuters who traveled more than 45 minutes a day and were not shy of speaking their complaints. The most common complaints were that long traveling made people fat, stressed them physically and mentally, and caused permanent back and neck pains.

I pondered as to why many like me are going through such fatigue on a daily basis, even though they realize what the consequences of such regular long commutes could be. The answer came from real-estate agents – people normally work in places of the city which are very expensive, and live in affordable areas that are further away from work.

Economists and doctors have been warning us about long commutes for over five decades now. In 1965, an economist, John Kain, wrote that households should consider the time, money and physical exertion for commuting. Costs of the journey to the work place and physical exertion are commodities while time is scarce.

“Workers should demand some compensation for the time they spend in commuting.”

Doctors warn that people must consider the consequences for their health and well-being. Research has concluded that driving for longer distances is associated with higher blood pressure, higher cholesterol, rise in depression, increase in anxiety, decreased happiness and life satisfaction, drop in cardiovascular fitness, lower sleep quality and back aches.

People must find ways to make their commute shorter or at least comfortable.

Don’t let all this scare you because there is surprisingly a lot you can do to keep yourself busy while on long commutes. Simply reading a book will prevent you from pushing yourself into isolation. Unless of course you’re driving! In that case, experts recommend downloading audio books that drivers could listen to while concentrating on keeping their eyes strictly on the road. If you’re not the bookworm, numerous podcasts can easily be downloaded and put on your USB or even your phone when you are using public transport.

Students should definitely make use of this time in the best possible ways. Record your lecture sessions and revise your lessons by listening to them while traveling. Psychologists often endorse and encourage the use of mind boggling games like Suduko or mental math quizzes to improve cognitive abilities.

If none of these peak your interest, buy a language tutorial CD or use phone applications to learn a new language. Photography of interesting subjects one encounters on their daily trips is a good way to see your commute in a different light.

‘Citizen Journalism’ is also another activity that people should indulge in during their endless commutes – expressing their views online and interacting with public is a healthy activity that can help fight depression that he or she may otherwise encounter.

However, much is still affected by long commutes – such as its association with blood pressure, fitness, time and sleep – which need to be considered to live a healthy life. Make sure you leave a minimum of 20 minutes every day to include exercise in your routine. Light jogging or walking is more than enough.