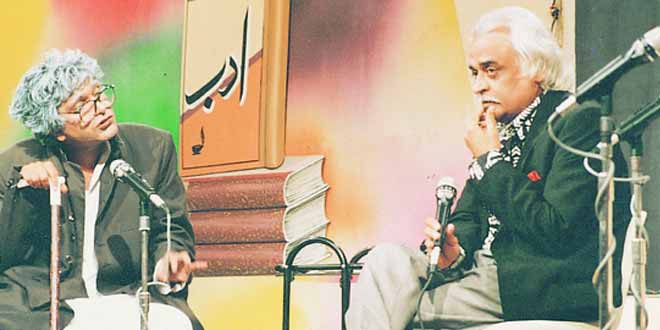 Comedians have evolved through time and entertained people in different ways. Sometimes they make us laugh revealing the lighter side of life and at times they make us realize the realities of life using satire as a weapon. Pakistan has seen some of the best comedians in the region.

Today we take you to this journey of laughter from Moin Akhtar to Saad Haroon as we pay a tribute to the fathers of comedy for setting a foundation for other young comedians, for making us laugh till we cried.

Moin Akhtar was a multi talented and versatile performer. He had worked not only as a stand up comedian but as a host and an actor. Moin Akhtar was first inspired by J. F Kennedy’s speech and Anthony Quinn’s work so therefore he mimicked the president’s voice presenting it with a comical touch.

He reached the epitome of national lime light when he performed in his hit series called “Rosy” where he played a female character. Apart from that, in  2005 he hosted the hit show called “ Loose Talk” with Anwar Maqsood for ARY that added to his national stardom and also gave him international recognition.

Moin Akhtar appeared as 400 different characters in the Loose Talk series. He was awarded honorary citizenship of Dallas in 1996 and a sculpture at Madam Tussaud’s wax museum.

Amwar Maqsood is a Pakistani actor, satirist, comedian, script writer. He is best known for his works for Pakistan Television Cooperation in the 1970’s. Anwar Maqsood’s work includes projects like Studio Dhai, Studio Ponaayteen, 50/50, Anghan Terha, Half Plate through which he has touched the hearts of his fans.

Breaking the stereotype that the industry is male dominated, the very talented Bushra Ansari has made her mark on screen. Bushra Ansari is a play write, an actress, a host who has served the industry for decades now.  She is not a comedian by her profession. Her pact with Anwar Maqsood and Moin Akhtar in the hit series Loose Talk has delighted countless hearts.

She has also performed comical roles in the Dolly ki aye gi Barat series as Saima Chaudry. She has won many awards for her achievements which include the Pride of Performance in 1989, the presidential award by Pervez Musharraf, Women’s Achievement Award by Benazir Bhutto and various Lux Style Awards.

Umar Sharif also known as the King of Comedy, is an actor, host, poet, writer rising to fame because of his stage presence. His extremely popular stage shows include Bakrah Kistoon Pey and Bhuddha Ghar Pe Hai.

He hosts The Shairf Show for Geo TV where he interviews celebrities in a humorous manner. His performance in the play called Umar Sharif Hazir Ho on the completion of 50 years of Pakistan earned him another milestone in his life.

He has won various awards in the category of Best Actor, Director and Writer. He was also presented the key of Karachi which has not been presented to any other actor apart from him.

Saad Haroon ranked the 2nd funniest person of the world is an internationally acclaimed Pakistani actor, comedian, and writer. He is also the creator of the comedy troupe “Black Fish” . Saad Haroon also has his TV show called “Real News” where comedy shows are presented in a satirical manner.

Danish Ali is also a young emerging comedian. Famous for not only having a great role to play in the comical troupe “Black Fish” but also for the comical videos he makes that are very famous amoungst youngsters. He is a stand up comedian also known for his skills as a dancer, producer, actor, radio personality and director.