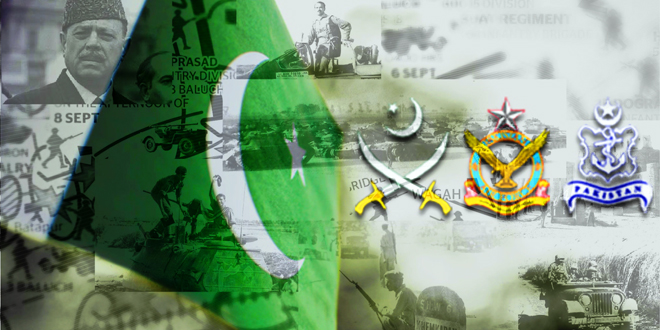 This Sunday marks Pakistan’s 50th anniversary of Defense Day (Yaum-e-Difa), celebrated to honor the martyrs of the Pak-India War of 1965 and to commemorate the sacrifices made by the Pak Armed Forces.

The day will commence with the nation observing a minute of silence at 9:29 AM for the martyrs of the war. The intention behind observing this silence is to express a clear message of unity in defending the motherland. At exactly 9:30am, all media organizations will air the national anthem, followed by prayers for the departed.

Simultaneously, the Federal Capital will begin the day with a 31-gun salute, while the provincial capitals with a 21-gun salute.

All preparations have been made to celebrate the day in full-swing. The government and private organizations have sketched out various events and programs for the day to fill colors, in the celebration. Along with the general public, these organizations will take part in the events to show the commitment of common citizens for the cause – territorial sovereignty.

The major celebrations will occur at the General Headquarters Convention Center in Islamabad, paying homage to the martyrs.  The monuments and graves of the deceased would be bloomed with flowers while Fateha is offered.

Various high level meetings have occurred to discuss and chalk up detailed programs for Defense Day. One such meeting was held on Friday, chaired by Minister of Defense, Muhammad Asif. Earlier, Information Minister, Senator Pervaiz Rasheed, chaired a meeting to make sure the day is celebrated with full enthusiasm and dedication.

April 1965 – Indian forces encroached into the Rann of Kutch, Pakistan. In a short period of time, the Indian army was forced back. Ceasefire was proposed by Pakistan and accepted by India.

Night of 5/6th September 1965 – India entered into Pakistan, without warning, in the regions of Lahore and Kasur. Within a day, the Pakistan Army, with the help of locals at the border and the Pakistan Air Force, were able to temporarily stop the Indian assault, causing huge losses on the Indian side.

7th September 1965 – Squadron Leader MM Alam shot down five Indian fighter jet planes in a single excursion in his F-86 Sabre. This earned him a world record. In the same night, 3 teams of the Pakistani SSG were dropped into an enemy air base in Pathankot, Halwara and Adampur.

Within the next twelve hours, the Pakistani mechanized and armored divisions – supported by the air force and the artillery – made forward results to relieve pressure from the Lahore front. They entered six to eight miles within the territories of Sulemanki and Rajasthan and made bold attacks.

Night of 7/8 September – One Indian Army Corps launched one of its major assaults, on the Sialkot front, with one armored and three infantry divisions. At the moment, the Pakistan army only had a reconnaissance and support company (3 Frontier Force and B Company 13 Frontier Force). Brigadier AA Malik (infantry) rushed Lieutenant Colonel Nisar Ahmad (Cavalry), to disrupt and delay the enemy thrusts

After World War II, this became the biggest tank battle ever fought in the Chwinda front, with six armored divisions, 24 infantry brigades along with four Artillery Corps. The morale of the Indian army was crushed by the response from the Pakistani side. Pakistani Airforce played a major role throughout the battle.

As per reports from the Pakistani Army, Pakistan was to launch a counter offensive attack after the tank battle with six armored divisions on 22 September, but the Indian army feared devastating losses and asked for a cease fire in the United Nations.

The aggression from India at the international border cost it 1617 sq. miles of territory. 20 Indian officers along with 588 other army servicemen were taken as war prisoners.