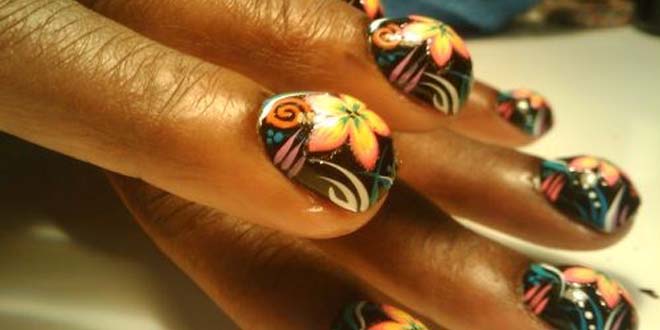 They say that after the face, a person’s hands are the second body feature people notice when they meet them. And while noticing the hand, the nails are scrutinized too – especially in case of women. Therefore, one needs to take care of their nails. Keeping them manicured and well-maintained is not just a sign of a well-groomed person, be it a man or a woman, but it is also a way to pamper yourself.

However, lately, in the manicure world, or I should say social media’s manicure world, a sort of mayhem has engulfed women. This mayhem has come in the shape of a popular nail trend, where instead of experimenting with nail polishes and bedazzles, women have now started meddling with the actual shape of the nail, making it boisterous and seem 3D-esque. This trend is called the ‘bubble nail’ and it really is as obnoxious as it sounds.

Acrylic nails are typically aimed towards thinness, but this latest trend is a contrary version to acrylic nails and is all about creating bulk through layers and layers of acrylic, which would eventually shape up a large curve on the nail. This new ‘bubble nails’ technique is also referred to as “hump nails” or “curve nails”.

Even though bubble nails are the hype of the manicure world, they’re not entirely a new technique. A magazine called NAILS had published an article in 2009 about the trend trying to make its way into becoming a popular style. Despite the fact that it wasn’t given much attention then, the trend has boomed up about six years later, all thanks to Instagram and women showing off their bubble nails under the #bubblenails or #humpnails hashtags.

Here are some of the posts from Insta, so you can have a better idea of what I am talking about.

I hate you hoes. #bubblenails #wtfisthis come around me with these and the roast you will receive will be so real.

A post shared by Aesthetic Beauty Liverpool (@aestheticbeautyliverpool) on Aug 9, 2015 at 2:41pm PDT

Basically, bubble nails are acrylics with a massive intensity towards abnormal thickness. To achieve the bubble nail look, the nail specialist places a ball of acrylic at the center of the nail and builds it out by adding layers to it. Acrylics are essentially applied as thinly as possible but this look aims to be all about the bulk. The main point is for the nail to have a popped out look.

Although the latest trend is escalating under two names, bubble nails and hump nails, there is a slight difference of technique between the two. Bubble nails are meant to keep the nail bed short while hump nails have a lengthy shape. However, a pointy or square shape can be done on either of them.

While there is a rising craze for the trend, there is also a definite cynical point of view by others. I would like to include myself in that other group if I had to comment on this ludicrous nail style.

As I continue to read articles and go through my Instagram viewing images of bubble nails, I continue to be a downer about this whole thing. Sometimes, it even grosses me out. Why would one want to do that to their nails? Why make them look all lumpy and chunky, being oblivious to how horrible they end up looking?

For me, bubble nails are a total fail.