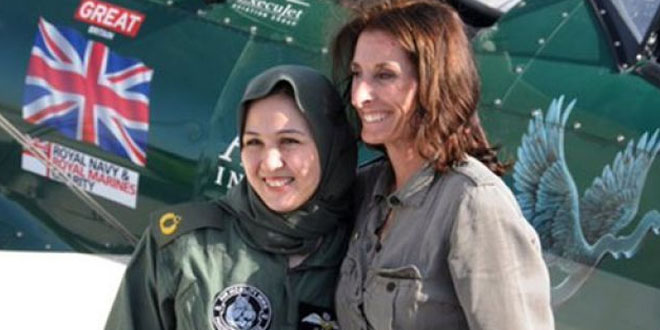 Raised in Canada, Tracey Curtis Tailor was always up for adventures and was extremely passionate about flying around the world.

Tracey had her first flying experience at the age of 16. In 1970s, Tracey, along with her family went to England and then later in the 80s she went to South Africa.

From South Africa, Tracey went back to the United Kingdom after some months and that too by road in a Bedford truck. During this five-month-long journey, she had to camp through savannas, jungles and deserts.

Shortly after her return, Tracey moved to New Zealand and began flying in earnest. She soon gained her private and commercial pilot’s licenses. Interestingly, Tracey was trained by military pilots on World War II airplanes with the New Zealand Warbird Association.

With her love for flying, an interest in geology and landscape, Tracey is also passionate about aerial photography and mapping. This is not the first time Tracey has planned on such an adventure. Back in 2013, she had successfully flown from Capetown to Goodwood. Tracey now has taken up the challenge to fly to Australia with a route that would take her at least 13000 miles.

Tracey has a plan to fly across Europe and the Mediterranean to Jordan, over the Arabian Desert, across the Gulf of Oman to Pakistan, through India and on to Myanmar, Thailand, Malaysia and Indonesia before crossing the Timor Sea to Australia. The flight is expected to take around 12 to 14 weeks. Once Tracey reaches Sydney in Australia, the plane will be shipped back to the USA to complete the world flight in 2016.

Tracey was welcomed at the Civil Aviation Head Quarters in Karachi where she was hosted by officials of Pakistan Air Force, Civil Aviation, HBL and the Chairman of Engro Pakistan. Not only this, school girls aged between five and 10 years also welcomed Tracey, who was wearing traditional Pakistani attire to represent the Pakistani culture. The ceremony was a grand one.

Speaking to us, Tracey said:

“I have received the highest level of support in Pakistan and it is truly astounding. It is a real honor to be welcomed by the Pakistan Military, the Pakistani government and our local partners, Engro Corporation and Habib Bank. Initially, I was told and warned about security concerns flying over Pakistan but, honestly, I have never received such a grand and beautiful reception as I received here.

Pakistan is beautiful. Yesterday I flew over the coast here and I saw spectacular scenery. Also, flying along the mountains in the north with the Prince of Greece was just out of this world. This is one of the best days of my life. I’m having a fantastic time here and I will certainly visit Pakistan again soon”.

We are glad to have Tracey Curtis here in Pakistan and welcome more foreigners to visit Pakistan. Perception is different to reality. Pakistan is a beautiful country with beautiful and peace loving people.