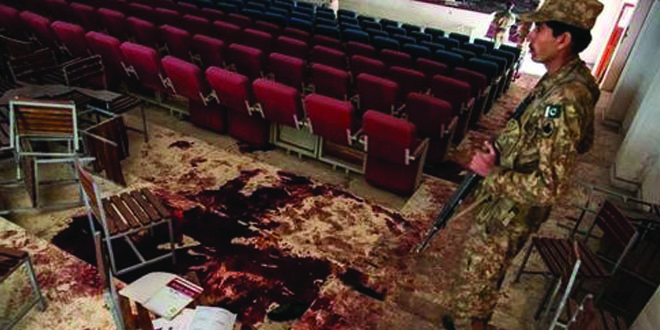 December 16 has been a significant date for Pakistanis for many decades now. This date represents an idea of loss, an understanding that something precious was taken away from the people of this country, as it marks the Dhaka Fall of 1971 – when Bangladesh was created.

Today, however, this date is being observed with a different motive, even though the idea of loss and the understanding of something precious being taken away from people are still very much present. Today, we mourn with a different purpose. We mourn the loss of innocent lives, lives who might have grown up to become extraordinary human beings. We condemn the gruesome barbarity that ensued today at the Army Public School, Peshawar, last year, when more than 140 students were sent to their graves by the Tehreek-e-Taliban Pakistan (TTP).

Today, we stand united against this evil, vowing that we will never forget – and never forgive.

In the past 365 days, a lot has happened in the way of making amends to the families of APS victims, those who have seen their lives turn from heaven to hell in a matter of hours. But while legislatures focused on curbing terrorism, verdicts supporting death penalties, operations being more brutal and security being more tightened all portray a sense of activity from the powers that be, it still doesn’t cut it for the people who have lost their worlds and continue to live in a conundrum of what their lives mean now.

Keeping aside the emotional and psychological trauma that the survivors and the families of APS victims have been through, it would do us all good to remember this incident from its human side, from the perspective of actual people who felt the pain, and from those who had to go through the gory details just to keep everyone aware of what’s happening.

The people who were working in newsrooms that day have a unique perspective to the tragedy. And some of them have shared their experiences with HTV below:

“When news of the APS attack broke on every channel and every platform of social media, I had just walked into work. Dumbfounded by the events that were unfolding on our dusty TV screen, I was trying to wrap my head around how I was supposed to carry out my journalistic duties and get someone to write a blog on it. What opinion is one even supposed to share?

Since my boss had taken a day off on this ill-fated day, my colleague and I brainstormed bloggers and a potential angle. Nothing came to mind except for flashes of breaking news tickers and footage of army personnel trying to secure the premises. We started calling and emailing potential bloggers who would feel strongly and got a blog from a journalist who was in Peshawar and was due to file something in on the attack.” – Zoya Zaidi, digital journalist and blogger

“After finishing my fourth final exam paper, my friends and I left for the market as we had planned to shop for the winters. On our way, I received a message from a friend whose two cousins were still in the school; he asked me to pray for them that they may still be safe and alive. Immediately, I asked him what had happened as I had no clue about the news. He told that there had been a series of blasts in Peshawar.

Being a citizen of Pakistan, such news was normal for me and I did not pay much heed to it. I had to cover a seminar on child marriages for my newspaper later than afternoon, so I left for the venue. Reaching there, the first thing I did was to get connected online. Somehow, I felt that there was more to this incident than just a bomb blast.

I checked my Facebook and I was stunned seeing the very first post on my feed, which read, ‘125 children killed and several injured in Peshawar school attack’.

The headline itself was a lot for me. Opening the link left my eyes filled with tears. Since then till night, nothing seemed normal around us. Reaching back to my office, the only thing I found was grief, sad faces and black television logos. The food didn’t taste good that day nor the fake smile of my mother, from which she tried to hide her tears hearing about the death toll, which had risen to 140 by then. It was an unbearable day.” – Yusra Salim, reporter

“During the course of the day, as the human story surrounding the blast began to unfold that feeling of discontent grew at a phenomenal rate. A mother mourned the loss of her children. Another woman’s children were nowhere to be found. A tear-stricken father, who had lost his son, poured his heart out on television. Every story was soaked in grief, fear and uncertainty and awakened a sense of insecurity within me.

I realised that the incident had not gone unnoticed. My friends on Facebook put up black screens as their profile pictures and wrote gut-wrenching statuses to condemn the massacre. For the first time in a long time, people had come out of their self-created shells to voice their anger and reservations over a tragedy.” – Taha Kehar, print journalist (this passage is an excerpt from his article titled ‘The day we were done with silence’)

“I was home when media broke the bad news of APS attack. The TV screen was bombarded with pictures from the site; pictures of beautiful children and teachers who lost their lives in the massacre. There was blood, dead bodies and mourning parents with a sad soundtrack running in the background all over the media. It didn’t stop there. They kept showing the pictures of those who died every hour every day! It was traumatizing!” – Sana Lokhandwala, digital editor

APS tragedy left us all disgruntled and in pain. Here’s to hoping that in the coming days, we are better equipped in avoiding such tragedies all together.