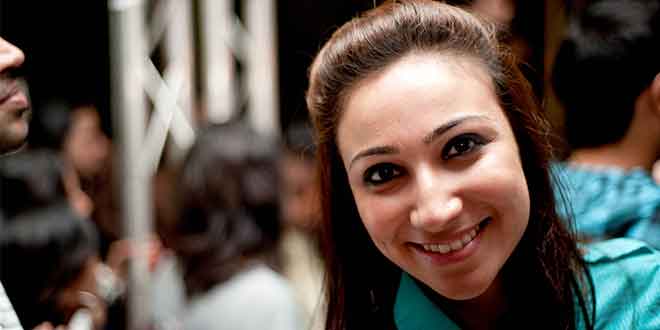 Anoushey Ashraf is a young and dynamic television personality of Pakistan, who started off as VJ and now hosts shows and is breaking out as an actor. She quickly climbed the ladder of success and is one of the most sought after faces for the younger generation in Pakistan today.

She’s extremely friendly and very humorous. Here is a short interview on how she manages her balance at work and how she tackles different people at difficult times.

Q: You started your career from being a VJ at Indus Music and now you’re a host as well as an actor, what do you enjoy the most?

I’ve done very little bit of acting so I’ll choose hosting because this is where I get to be myself, here I speak my mind and I’ve been doing it for so long that it is more convenient now but it is also very challenging and interesting so hosting is where I’m confident. Talking about being a VJ, it is primarily a video jockey thing but as a host, specially doing a morning show, you’re catering into a separate audience, you need to be more orientated and you get to discuss a lot of serious issues and learn from it so that is definitely different and enjoyable.

Q: The field you’re in, you’re your own boss, how do you choose your work, it is based upon the people you’ll have to work with or just the content?

I’ve always tried to work with the team that is on the same page. Content matters too because live show is all about the content, the people I’ve ever worked with, Alhamdulillah, have good content as well as friendly atmosphere to work with.

Q: You’re strong woman, we can say this because we’ve never heard any controversy related to Anoushey Ashraf, how do you keep the balance?

Surprisingly, yes. I’m not controversial at all, I go to almost all the events, you can say I’m pretty easy, I’m exactly how people see me as and I’m thankful for this because I know this can be horrible.

Q: How do you keep your fans updated?

I’m trying to use Instagram now and I’m really enjoying it so I put pictures after a gap of every two three days in fact sometimes twice in a day.

Q: With positive comments, you do get negative comments as well, how do you deal with the negativity?

If you go to Shahrukh Khan’s fan page, you’ll see people abusing him so I realized being a public figure its okay if all of this happens. Initially, I felt very bad in fact I did cry twice or thrice but now I’m just like they do it for attention because if you write back to them, they will start apologizing. Also, it doesn’t matter now because now I’ve realized that even if they pass such comments that wouldn’t stop me from doing the work or that I will stop getting work but sometimes if the comment is really annoying, I just delete it but again I can’t even follow everything they say.

Q: People love you but also there are people who would literally stalk you and invade your privacy, how does that feel?

It feels nice but sometimes it gets annoying because in Pakistan when boys are stalking you, you don’t even think that he’s a fan, you’ll just get the impression that he’s going to kidnap you or shoot you so I get a little scared but there are people who are nice so it’s a combination of both. Talking about crazy fans, one of the boy came to my house, my mom welcomed him and made him sit in the living room thinking he’s my friend when I came home, my mom told me your friend is waiting for you, it was funny when I went to him and he’s like I mailed so I started telling my mom that you shouldn’t just let everybody in but these days it doesn’t happen because we are all very accessible celebrities.

Q: When you get into a conflict, do you bulldoze the conflict or deal with it evenhandedly?

I don’t have rivalries in this industry, none. I’ll say “apni izzat apne hath mai hoti hai”, I don’t think our industry is as bad as people portray it, I’ve come to realized that this isn’t just our industry, conflicts happen in banks, offices too but MashaAllah, I can say this with complete confidence that never been once in my entire life any such incident has happened or I’ve been involved into conflicts or felt embarrassed.

Q: How is your relation with your makeup artist or spot boys?

I try to keep a friendly relation with them because those are the people who bring out the best in me so more than anybody else I keep them on the same page as me.

Q: What have you learnt from this industry?

This industry has taught me everything, I’ve been working here for 12-13 years, started when I was 18. I grew up working here, it gave me confidence, and it gave me a name, an identity, respect and also money. Met some great people too so I everything I know right now in this professional world and real world is due to this industry and it’s a great industry, I’ve interacted with all kind of people even with some of the biggest stars so it’s been good. I’m very glad that God has put me in the right place at the right time.