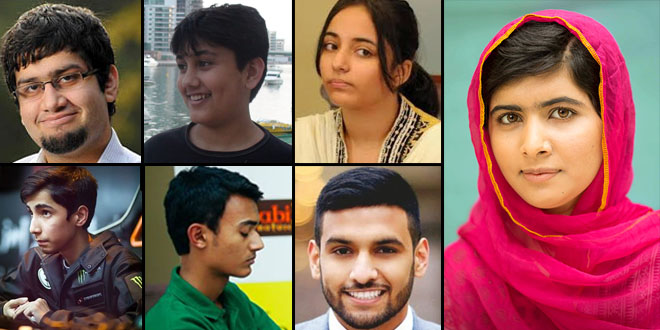 7 Pakistani youngsters we should celebrate this Youth Day

It is often said that a country’s youth is a good reflection of its future. And so far, Pakistani youngsters look bright. While many are of the view that our youngsters are lazy and inept, I would like to clarify that our youth has done more than we could ever imagined and they represent us in all spheres of life with pride.

They have achievements not only in Pakistan but internationally as well, and so this International Youth Day, let’s celebrate these youngsters who have made Pakistan proud.

This girl shook the world by taking a bullet under attack by terrorists. Her ambitions towards education led her to be an educational activist from the town of Mingora in Swat District. She is the youngest nominee and the second Pakistani to get the Nobel Peace Prize in history. She has her own slogan, song and even a film under the title “I am Malala” launched by the United Nations. In fact, a day in her name, Malala Day, is also celebrated on November 10 as announced by the UN Secretary-General Ban Ki-Moon.

Arfa was born in 1995 in Faisalabad, Pakistan. By the age of nine in 2004, she had become the youngest Microsoft Certified Professionals (MCPs) in the world. She was invited by Bill Gates to have a tour of the Microsoft Headquarters in USA, in which she presented her poem about Gates. In August 2005, she received the Fatimah Jinnah Gold Medal in the field of Science and Technology. She also received the President’s award for Pride of Performance. Sadly, we have lost Arfa due to cardiac arrest on January 14, 2012 at the age of 16.

This young man is probably someone who is known to all Pakistanis. He is the boy who went for his dream to make Pakistan look the opposite of what the world deemed it to be. He scored 22 A’s in his A’ levels, proving to the entire world that Pakistan does not lack potential of intellect and is on the right path to education. After graduating from Cambridge University, he came back to his country to start many different projects in favor of youth education, such as Twenti3 Group, Step Up Pakistan, AMN Schools, and AMN Kids.

This young and famous social media icon may live abroad but his heart and identity is Pakistani to the core. His amusing videos usually portray the different lifestyles of Eastern and Western families. This guy could cheer up anyone from having a bad day, as he is brilliantly gifted with not only good ideas for his video but also his awesome acting skills which he showcases in all of his videos. Recently, he has also been focusing on serious topics that are overlooked, especially by Eastern societies, of creating awareness towards rape and the importance of women in our society. He was also featured in Facebook’s Year in Reviews, next to Malala.

He is the boy who won the World Youth Scrabble Championship 2013 title in Dubai. The 16-year-old Pakistani was crowned champion with an overwhelming spread of +1448, winning 19 matches out of the 27 game marathons. Around 136 participants from different countries contested, but Pakistan brought the title home.

This is the youngster from Pakistan who has made us proud very recently in January 2015 by winning the Asian Championship of Dota2 once again! He won it on the biggest stage electronics sports industry has ever had. His team has won $6.6 million USD, which proves that Pakistanis are capable of anything and everything; we can win on any platform at any game.

This list of the younger generation of Pakistan’s achievement can go on forever. As we continue to prosper by winning numerous gold medals at the Special Olympics, or having the youngest prodigies in the IT world, I cannot help but feel positive about the days to come.