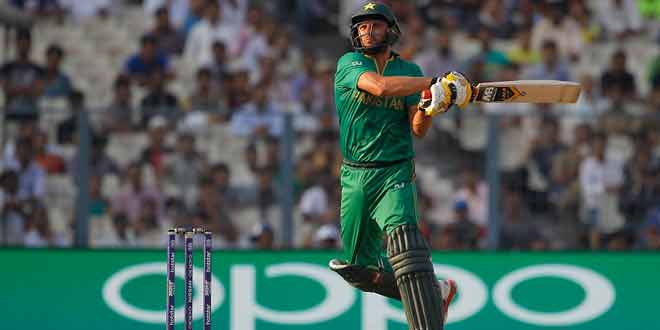 Pakistan started off their campaign at the World T20 with a thumping 55 run victory over the Bengal Tigers at Eden Gardens in Kolkatta on Wednesday.

Shahid Khan Afridi won the toss and elected to bat first as Pakistan looked to initiate a good start to contend for this year’s prestigious event.

Sharjeel Khan and Muhammad Hafeez opened the innings for the men in green as they provided a steady start to the innings. The left handed Sharjeel Khan left for the pavilion after making 19 runs. His short stay at the crease included two sixes. Ahmed Shehzad – who was included back in the squad in place of Khurram Manzoor – came to the pitch to support Hafeez. The right handed duo added 95 runs in 11.2 overs to provide the optimum partnership for Pakistan to build on. Hafeez scored a well made 64 runs but was sent back to the dressing room as he was caught brilliantly by Somya Sarkar at the boundary line. Shahid Afridi stepped up the batting order and didn’t disappoint. Playing one of the best innings of his career, Shahid Afridi smashed a quick fire 49 runs from just 19 balls which helped Pakistan reach the target of 201 runs. With this feat, it was for the first time in an ICC T20 World Cup that a score of 200 was scored.

Pakistan started off their bowling in full flow as left arm pacer Muhammad Amir rattled the stumps of Soumya Sarkar with only his third delivery of the first over. Wickets fell at regular intervals for Bengali’s. Shahid Afridi also stepped up to the party and took two important wickets for his side. Shakib ul Hassan was the pick of the batsmen as his unbeaten half century proved to gain some consolation for his side.

With this victory, Pakistan lead Group B with hosts India at the bottom of the table. Pakistan will be hoping to beat India for the first time in a World Cup event as the cricketing juggernauts meet on Saturday, 19th March 2016.