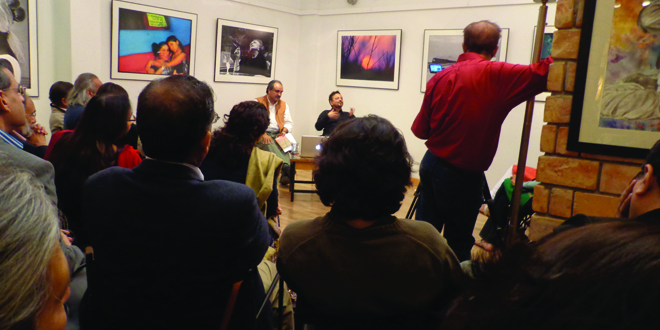 T2F in the running for Dutch Human Rights Tulip Award

Pakistani NGO The Second Floor/Peace Niche has been nominated and in the running for the Dutch Human Rights Tulip Award 2015. The award is presented by the Ministry of Foreign Affairs in Netherlands to those who promote and support human rights in innovative ways.

Voting for public started on September 9th and will be open until September 16th. The winner will be announced on December 10th, and awarded a prize of 100,000 Euros “to further develop or expand the scale of its human rights.”

Started in 2007 by Sabeen Mahmud, T2F, a project of Peach Niche, is a café, community center, cultural space, and art gallery and performance area. It encourages the dying arts of conversation, reading and poetry, and welcomes students, writers, musicians, artists, poets – just about anyone – for open discourse of ideas and social change in Pakistan.

Sabeen was assassinated by gunmen on bikes in April 2015 after hosting a discussion on a current Baluchistan human rights issue in the café.

Mahmud’s NGO is among 30 other organizations that have been nominated by Hivos, an NGO, and the Dutch Ministry of Foreign Affairs. After the voting period, only six candidates will be left of which three will be public favorites and three wild cards selected by an independent jury who will meet and advice the Dutch minister of Foreign Affairs and select the winner. The prize is a way for human rights organizations and people associated with such to learn from each other.