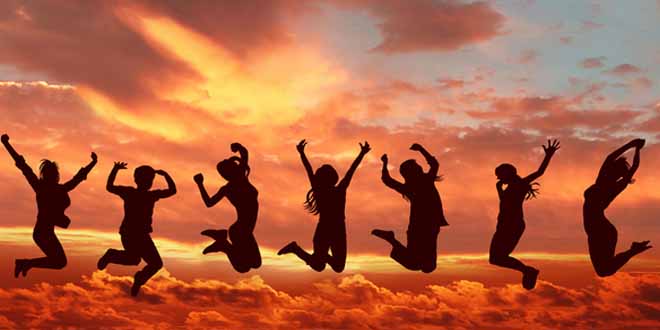 Most people want to be happy in their lives. Here are ten science backed tips to increase your happiness.

Exercise is by far the best form of activity to increase your happiness. It has a deep effect on happiness and well-being and it has actually been studied and proven effective to combat depression. It’s a proven fact that exercise releases endorphins (chemicals released from the brain that improve your happiness). There was a study done that showed a group of patients who used exercise to treat depression were least likely to relapse into depression. The other two groups that were studied were those who used medication and those that used a combination of medication and exercise. You don’t have to be depressed to gain benefit from exercise though. Exercise can help you relax and increase your brain power. You also don’t need to have such a grueling 45 minute workout to have an impact on your health. There is a scientifically backed workout that only takes 7 minutes. But those 7 minutes need to be moderate to high intensity with very short breaks in between each exercise. The image below shows each exercise that must be done in 7 minutes.

Sleep not only helps our bodies recover from exercise or the day to day activities, and keeps us focused and productive, but it also has an impact on our happiness. It makes us less sensitive to negative emotions.
The amygdala is a small structure located in our temporal lobes of the brain that processes emotions. Moreover, negative emotions gets processed by the amygdala and positive emotions and memories get processed by the hippocampus, another small structure located in our brains. What does this have to do with sleep? Well, sleep deprived people fail to recall pleasant memories, yet recall sad and unhappy memories more. This eventually leads to unhappiness and possibly depression. In one experiment that was done, sleep-deprived college students were given a list of words to memorize. The students were able to recall 81% of the words that had a negative association such as “cancer,” but only 31% of words that were positive in nature such as “sunshine.”
Another study explored how sleep affects our sensitivity to negative emotions. The study utilized a facial recognition task to determine how the participants reacted to positive and negative emotions throughout the day, and it revealed that the participants who did not take a nap during the day were more likely to react to negative emotions, such as anger and fear, by the end of the day.
If you have trouble sleeping, read our article on Easy Tips to Cure Sleeplessness.

Meditation is key for improving focus, clarity as well as attention span. But its even more important for overall happiness and a general feeling of well-being. One study that was done in the Massachusetts General Hospital in Boston, Massachusetts found that the participants who went through an eight-week program of meditation and mindfulness had an increase in the parts of the brain that are associated with compassion and self-awareness and the parts that are associated with stress decreased.
Meditation can really clear your mind, which is helpful when you have had a busy day and there is a lot on your mind, especially when some negative emotions are bottled up. Research even shows that meditation can alter our brain to raise the levels of happiness. The image below shows just how helpful meditation can really be.

Socialize
Spend time with friends and family, you’ll regret it if you don’t. Try to socialize as much as you can, in a healthy manner of course. Social time is highly beneficial when it comes to our happiness. Don’t worry, we have several studies that prove this fact.
First, though, a quote from Daniel Gilbert who is a Harvard happiness expert: “We are happy when we have family, we are happy when we have friends, and almost all the other things that make us happy are actually just ways of getting more family and friends.”
George Vaillant is an American trained psychiatrist from Harvard and is the director of a Grant Study that has studied 268 men over many decades in time. He has found that good sibling relationships are powerful; 93% of the men who were aging well at age 65 had been close to a brother or sister when they were younger. He has said that “the only thing that the only thing that matters in life are your relationships to other people.”
A study that was published in the Journal of Soci-Economics stated that relationships are worth more than money. Actual changes in income buy very little happiness. So we could increase our income by 100% and we would still not be as happy as if we had strong social relationships.
Another study called The Terman study found that those participants who helped their neighbors and friends, either advising or caring for others, tended to live an old age. So how we help others is another important factor for living a happy life. Which brings us to our next point.

To make yourself feel happier, you should help others. It has been noted that approximately 100 hours a year, or two hours a week, is the perfect amount of time we should utilize in helping others to make our lives better.
A study of volunteering in Germany was conducted. There was a period in time in Germany when volunteerism was flourishing. However, after East and Western Germany reunited, a lot of the infrastructure of volunteering fell and people lost the opportunities to volunteer. There was a change in the well-being of these people, and the hypothesis was confirmed that volunteering is rewarding in terms of higher life satisfaction.
Another research study was found to conclude that spending money on other people was more satisfying than spending money on oneself. Researched interviewed 150 people about their recent purchases and found that it was more satisfying spending money when socializing and going out to group dinners instead of spending money on materialistic things. A study was published that went further into this topic. Participants were asked to recall previous purchases made for themselves and purchases made for other people. The participants who were asked to recall purchases made for other people reported feeling much happier than the people who purchased items for themselves.

Plan a holiday, but don’t actually take the trip. Planning a vacation or just taking a break from work can improve our happiness. A study that was published showed that an increase in happiness came from the planning of a vacation rather than the actual vacation itself, as the participants enjoyed the anticipation of the vacation. In the study, the effect of vacation anticipation boosted happiness for eight weeks, then after the vacation the happiness dropped down to low levels again.

Spending time in the fresh air improves your happiness. One study found that spending 20 minutes outside in good weather boosted positive well-being, broadened thinking and improved memory. A UK study that was conducted also found that people who were outdoors were happier. Being outdoors, near the sea on a warm sunny weekend is the perfect spot. The participants were found to be happier outdoors in natural environments rather than indoors in urban environments.

Smiling can alleviate pain. It can make us feel better, but it is most effective when we have positive thoughts to go along with that smile and not fake smile.
A study conducted by a Michigan State University business scholar concluded that customer-service workers who fake smile throughout the day worsen their mood and decrease their productivity. But employees who smile as a result of positive thoughts improve their mood.
Smiling can also improve our attention and help us perform better on cognitive tasks. A study showed that participants who smiled performed better on tasks that required more attention, such as seeing pictures of a whole forest rather than just individual trees.
Smiling can also reduce stress caused by some troubling situation. Psychologists call this facial feedback hypothesis. Even forcing a smile can lift our mood slightly.

Practicing gratitude can improve outlook on life. You can practice gratitude by keeping a journal of things you are grateful for, or sharing some good things that happen each day with someone you are close with or even showing gratitude to others when they help you. In an experiment conducted where participants wrote down things they were grateful for each day, it found that their moods and well-being improved over time than the group who did not participate in noting things down. Another study was published in which 219 men and women participated in over a 3-week period. They wrote letters of gratitude and their life happiness and satisfaction increased while depressive symptoms decreased.

By living closer to work, you will find more happiness. We understand that its not always possible to live closer to work, but understand that over time the long commute between home and work does make you more unhappy. With the traffic and the evening feeling of just getting home does tend to make us less happy. Two Swiss economists who studied the effect of commuting on happiness found that “such factors could not make up for the misery created by a long commute.”

If you want to be more happy, follow these simple science backed tips. To get the best possible outcome of your day, you should sleep early, get up early, exercise for 7 minutes and meditate for 10 minutes in the morning. Smile throughout the day, and during the down times at work, take a mental vacation and plan for one. Go outside every day to the park and breathe some fresh air and socialize with your family and friends such as going out to dinner. Stay healthy and happy!