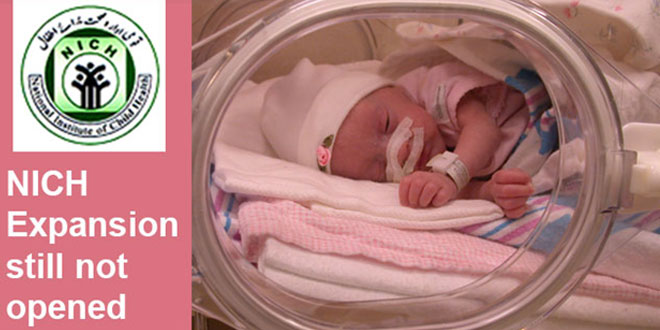 There is an urgent need to increase the number of ventilators and incubator facilities in public sector hospitals of Karachi providing treatment and consultation facilities for almost all types of pediatric diseases in the city.

An official of National Institute of Child Health (NICH) told that number of pediatric patients in OPDs and Emergency Department  has increased almost by 70 per cent in the last ten year but the number of ventilators and incubators facilities remain the same.

He said around 20 to 25 children are brought daily in Emergency Department out of which only five to seven get ventilator facility while rest are being referred to private sector hospitals due to unavailability of facilities.  He further said number of incubators has also not increased since long.

He said NICH is one of the largest and the only children hospital in the province of Sindh. He said it provides tertiary care services for almost all types of pediatric diseases and is equipped with latest diagnostic gadgetry.  But the numbers of ventilators and incubators have not increased by the administration with passage of time.

Deputy Director, NICH, Arshad Domki, informed that over 20 ventilators and 69 incubators are available in institution to accommodate critical patients but administration has been facing acute shortage of skilled staff to handle children on incubator and ventilators.

He said there is an urgent need of two more NICH like tertiary care institutions in Karachi to handle children with severe illnesses in government sector hospital. He said NICH administration is ready to increase ventilators and incubators facilities in hospital if skilled staff is provided to institution on an urgent basis.

While on the other hand, health department government of Sindh has miserably failed to make functional expanded section of Sindh Government Children Hospital North Karachi despite the passage over one year. The city’s second largest Children Hospital situated in North Karachi had been completed in collaboration with Japan International Cooperation Agency (JICA) but provincial authorities concerned of health department has failed to make operational this institution yet.

The 50 bedded facilities were expanded to over 200 beds in hospital.  The hospital administration can accommodate over 200 patients at a time and can also provide facilities such as operation theatres, medical center and surgical ICUs, nursery, incubators, ventilator unit, surgery facilities, medcare orthopedic unit as well as treatment of other child diseases.

But unfortunately the new section of children hospital could not be opened for public despite the passage of over one year due to incompetency of authorities concerned.