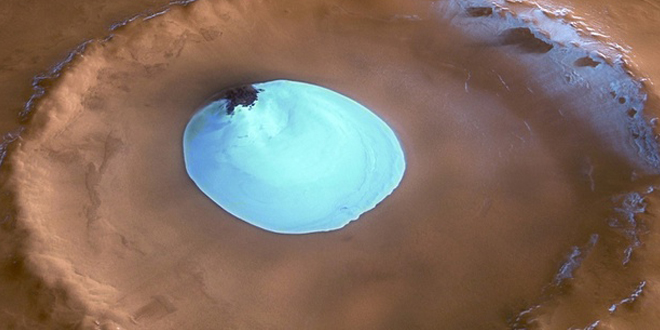 Liquid water has been observed on the planet Mars which makes it far more likely that life could be found there, the US space agency NASA said Monday.

“Mars is not the dry, arid planet we thought of in the past,” Jim Green, NASA’s planetary science director, told a press conference.

“Under certain circumstances, liquid water has been found on Mars.”

Scientists have long speculated that there may once have been life on the Red Planet. The presence of liquid water makes it possible that life could currently exist there, NASA said.

“The really exciting thing about this is that our view of this ancient Mars, and the possibility of life originating on Mars, had been really about seeking chemical fossils of possible past life on Mars,” said astronaut John Grunsfeld, who is also associate administrator of NASA’s science mission directorate.

“The existence of liquid water on Mars — even if it’s super salty briney water — gives the possibility that if there’s life on Mars we have a way to describe how it might survive.”

With several missions to Mars already in the planning stages, the question of whether there’s life on the planet is now “a concrete one we can answer,” Grunsfeld said.

The presence of water will also make it easier to send a manned mission to Mars, which NASA aims to do in the 2030s.

“To be able to live on the surface, the resources are there,” Grunsfeld said.

Water is “critical” he said, but the planet also offers other key elements like nitrogen which could be used to grow plants in greenhouses and the types of salts that could be used to make rocket fuel.

The announcement comes days before the blockbuster film “The Martian” opens in which Matt Damon manages to survive on his own after being left for dead with about a month’s supply of food.

Scientists have long believed that water once flowed across the Red Planet and formed its valleys and canyons, but a major climate change about three billion years ago changed that.

“Today we’re revolutionizing our understanding of this planet,” Green said.

“Our rovers are finding there’s a lot more humidity in the air.”

The rovers have also found that the soil is more moist than anticipated.

In 2010 scientists observed dark streaks running down Martian slopes. They suspected that the streaks — which would form in spring, grow by summer and then disappear by fall — could be water.

“It took multiple spacecraft over several years to solve this mystery, and now we know there is liquid water on the surface of this cold, desert planet,” said Michael Meyer, lead scientist for NASA’s Mars exploration program.

“It seems that the more we study Mars, the more we learn how life could be supported and where there are resources to support life in the future.”