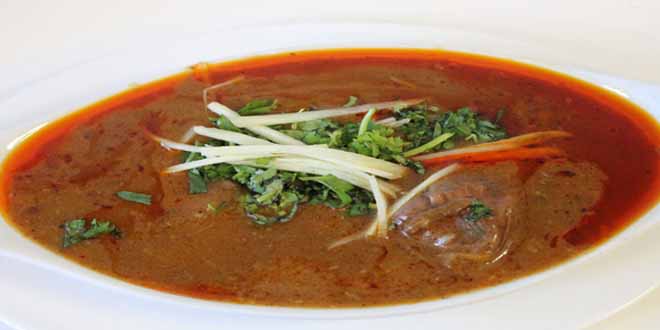 How Good is Your: Nihari

Nihari is a tasty Pakistani dish consisting of slow cooked beef shanks or even chicken garnished to taste with a lot of spices which gives the dish its rich color and flavor and sometimes served with bone marrow. The word ‘Nihar’ originated from the Arabic word ‘Nahar’ which means “morning after sunrise,” or “nahar munh.” According to many sources, Nihari originated in Old Delhi in the late eighteenth century during the last reign of the Mughal Empire. The Muslim Nawab ate Nihari early in the morning after Fajr prayers and then took a long nap before going to Zhur prayers. Later on, it became popular among the labor class as a regular breakfast dish. After the independence of Pakistan from India, many cooks migrated to Karachi and various other cities and established restaurants, and served Nihari as a dish. It soon became a success and now Nihari is considered to be one of the national dishes of Pakistan.

Before we get into the preparation of Nihari, let’s discuss some of the ingredients used.
The main ingredient of Nihari is the gosht, or meat used. You can use beef or chicken. Beef is an excellent source of complete protein and minerals such as zinc, selenium, phosphorus, iron and B vitamins. Red meat is the most significant dietary source of creatine. Creatine is a nitrogenous organic acid that occurs in mammals that have backbones. It helps to supply energy to all cells in the body primarily muscle. This is achieved by increasing the formation of adenosine triphosphate (ATP) which transports chemical energy within cells for metabolism. While beef is rich in protein and other vitamins and minerals, it is advised that individuals should consume red meat sparingly as it has high levels of undesirable saturated fats which can lead to cardiovascular diseases. Also, eating meat high in creatine poses a risk as excess of creatine can cause liver and/or kidney damage. Chicken would be ideal for people who are overweight and could suffer from cardiovascular diseases as it contains about 2-3 times as much of unsaturated fats than saturated fat in red meat. The difference between saturated fat and unsaturated fat is that saturated fats increase low density lipoproteins (LDL or bad cholesterol) and very low density lipoproteins (VLDL or the worst kind of cholesterol). Unsaturated fat increases High density lipoprotein (HDL or good cholesterol) and decrease low density lipoproteins. Excessive consumption of saturated fat is not good because of their association with atherosclerosis and heart disease. Unsaturated fats are considered good to eat if you are watching your cholesterol as a result of weight issues and also are high in antioxidants.

Laal mirch is said to improve circulation, digestion, regulate blood pressure and lower cholesterol. The main component of laal mirch is capsaicin, which is the reason for its spicy taste. It has historically been used as a pain reliever, particularly to relieve pain due to arthritis or shingles (painful rash like herpes). It does this by regulating the chemical balance inside sensory cells that relay pain messages to the brain.

Haldi has many benefits. It boosts immunity, has anti-inflammatory and anti-oxidant properties which play a role in curbing diseases and cancer, it prevents type 2 diabetes, promotes weight loss, and improves rheumatoid arthritis. In addition, if used as an ingredient in facial masks, it improves skin and aging.

Coriander powder aids in digestion, is a good source of vitamin C, it is anti-diabetic, has anti-bacterial properties, contains high amount of iron to prevent anemia, and one of the best remedies for conjunctivitis (pink eye).

Adrak has fantastic anti-bacterial powers and is a great natural remedy for sore throats. It also acts as an excellent digestive aid by helping to relieve indigestion, gas pains, diarrhea and stomach cramps. Along with adrak, lahsun is also a good source of anti-bacterial properties to kill off those bugs and germs that can cause cold and sore throats. This potent herb is also known for lowering cholesterol and possibly slowing the growth of cancer cells

Although our ancestors used to eat Nihari in the morning, we don’t recommend it as a breakfast item. It can be a very heavy and even though it has a lot of protein due to the meat, it can make you lethargic. Also, people enjoy eating Nihari with fresh naan, but naan can be full of simple carbohydrates which are mostly bad for you. So instead of eating it with naan, eat Nihari with brown roti instead. I recommend eating Nihari in the evening before 8 pm so it can be fully digested before you sleep and limit your intake to once a week, at most 3 times a month.