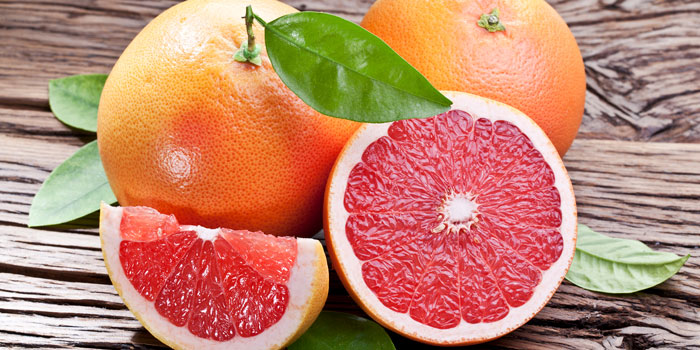 Grapefruit has surprising health benefits. It is a hybrid between an orange and a pomelo (chakothra) which brings out its large size and citrusy flavor. This fruit is full of vitamin C which boosts the immune system and helps treat colds. The white pulp is packed with other nutrients. There are two types of grapefruits that are available, red/pink and white. Let’s delve further into the many benefits of grapefruits.

Vitamin C helps prevent and fights the common cold and grapefruit is chock full of vitamin C. Vitamin C also prevents the free radical damage caused by inflammatory responses (response by tissues towards harmful pathogens that enter the body) and can therefore play a role in treating asthma, rheumatoid arthritis and osteoarthritis. Vitamin C is also beneficial for promoting cardiovascular health. There has been research that vitamin C is also associated with the reduced risk of death from heart disease, stroke and cancer.

Kidney stones are a buildup of calcium in the urethra, causing the calcium to form small stones. Kidney stones can be fairly painful, especially when trying to urinate. Drinking up to a liter of grapefruit juice has been shown to help break down the kidney stones.

Grapefruits contain pectin, a form of soluble fiber that has been shown to slow down the progression of atherosclerosis (hardening and narrowing of the arteries, eventually blocking the artery, putting blood flow at risk). Both types of grapefruit can reduce the blood levels of LDL (bad cholesterol) while red grapefruit also lowers triglycerides.

There has been scientific research done to indicate that grapefruit aids in weight loss, especially when going through a fitness program to lose weight. Grapefruits also boosts metabolism, increasing your efforts to lose weight. With an increased metabolism, your fat continues to burn even as you rest.

Pink/red grapefruits contain lycopene, an antioxidant that has anti-tumor activity. It helps fight oxygen free radicals which damage cells. When taking green tea and lycopene rich foods such as grapefruits, men have shown to have a reduced risk of prostate cancer. Research indicates that the fruit even repairs damaged cells at the DNA level due to the flavonoid called naringenin.

Protection Against Lung and Colon Cancer

New research has indicated that grapefruits can also protect again lung and colon cancer. Drinking three 6-ounce glasses of grapefruit juice a day can reverse the effects of cigarette smoke (to a small degree) and was shown to reduce the activity of an enzyme that activates cancer causing chemicals found in tobacco. Grapefruit also increased the likelihood of programmed cell death of cancer cells in the colon as well as increased affinity to produce normal colon cells. Pink grapefruit has been shown to be the most effective.

Drinking grapefruit juice or eating grapefruits help to detoxify your liver by removing unhealthy toxins from your body. Overall detoxification can improve and alleviate symptoms of chronic conditions such as depression, stiff muscles and headaches.

Enjoy a grapefruit either with your regular breakfast meal or as a snack during the day and reap the benefits of this healthy fruit. You can even drink grapefruit, and it’s preferable that you squeeze the juice out from fresh grapefruits rather that drink grapefruit that has been added with artificial flavors and other ingredients. Grapefruits boost your immune system, lower cholesterol, increases your metabolism, protects against cancers and is a great liver detoxification food.

Is Your Smartphone Messing Up Your Spine?