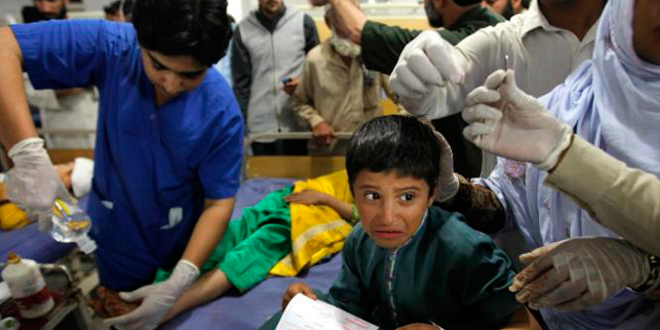 Violence against healthcare providers on the rise in Karachi: Study

The International Committee of the Red Cross-Pakistan in collaboration with Appna Institute of Public Health of the Jinnah Sindh Medical University, Jinnah Postgraduate Medical Centre (JPMC) and Ziauddin Medical University has launched a research report titled ‘Violence against healthcare: Results from a multi-centre study in Karachi’.

Sindh Health Minister Jam Mehtab Hussain Dahar, who was the chief guest on the occasion, said the report identifies problems faced by healthcare providers and patients and paves way for improvement. “This report will guide us in preparing effective policies so as to better protect healthcare from violence and its consequences,” he added.

Professor Lubna Ansari Baig, dean of the Appna Institute of Public Health and principal investigator of the study, said the objectives of the study were to identify different types of violence and assess its impact on the victims.

Quoting from the study, she said: “Almost two thirds (65.6%) of healthcare providers in the city have either experienced or witnessed some kind of violence while one third (30.5%) have been either attacked verbally or physically over the past one year.

According to the report, verbal violence was experienced more than physical violence. Patient attendants were found to be the chief perpetrators. Incidents included abusive language, pushing and pulling, threats, and use of fists and feet. Simultaneously, a legal review was also conducted by Research Society of International Law (RSIL) to take stock of the legal framework within which the Karachi healthcare sector operates.

The ICRC’s head of delegation in Pakistan, Mr Reto Stocker, reiterated ICRC’s unwavering commitment to support the authorities and other local actors in ensuring the report results into concrete actions to improve the situation. In addition, he said, “The authorities in Karachi have not only owned but significantly contributed towards this initiative to make Karachi a safe place for both patients and healthcare professionals”.