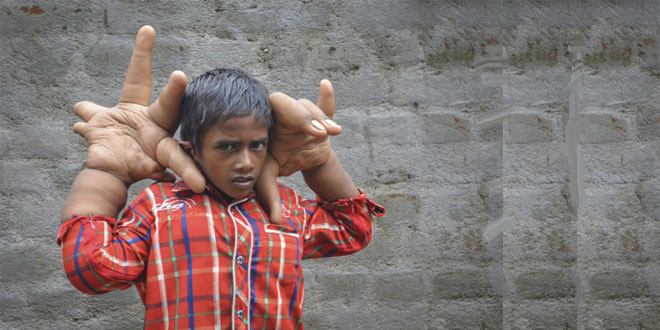 The kid with the giant hands

The world is full of people from all walks of life. Some are poor, some are rich. Some are healthy, and some are ill.

Then there are those people who suffer from extreme medical abnormalities, which make it hard for them to be seen as “normal” functioning members of society.

One such case is of Mohammed Kaleem, a nine year old boy from India who is diagnosed with a rare form of localized giantism, which has caused his hands and arms to grow at an exponential rate, till they weighed 2 stone, about 27.97 pounds, between them.

Because of his illness and giant hands, he has always been outcaste by his peers and other adults in his village. His peers would often bully him and he was even denied admission to school because his hands would “scare other children (bache).”

Superstitious neighbors believed his illness was due to a curse, and thought Kaleem a “devil’s child.”

His illness, localized giantism, can be caused by various other underlying diseases. Some are congenital (meaning by birth) and some are acquired after certain years through environmental or other causes. Kaleem was born with the condition, and where as antibiotics could treat some cases of such type of inflammation, Kaleem has to undergo surgery to reduce the size of his hands.

When giving a statement, the local headmaster of the school he was rejected to, was rejected for “certain reasons” to which they could not accommodate him. Upon hearing that Kaleem was undergoing treatment, the headmaster now feels that “he can begin classes.”

Such a great headmaster you are. Now that he is somewhat normal, you are letting him learn.

It’s sad to hear such cases, where people with abnormalities and their families are shunned from society. Sometimes the closest family members also take part in this shunning. At the risk of sounding ignorant, most of the time these types of cases come from undeveloped countries, and people around them are uneducated and illiterate. Kaleem’s own uncle had the view that there was no treatment and Kaleem was a “devil’s child,” caused by his parents “committing a wrong deed at some point in their life.”

Although this is one type of complex medical case that results in abnormalities, there are many others.

Stone Man’s Disease is one of the rarest genetic conditions and is extremely debilitating. Although it is rare, there are still a few hundred known cases.

The disease is medically termed as fibrodysplasia ossificans progressive (FOP). It essentially effects connective tissue. A mutation of the body’s repair system causes fibrous tissue – which includes tendon, ligament and muscles – to be ossified (the process where new bone tissue is formed). The disease essentially makes an abnormal amount of bone tissue – where muscles, tendons and other connective tissue is supposed to be – causing the person to look like a stone, hence the layman name. The disease restricts movement, and the disease can result in a “second skeleton.”

Have you seen the movie The Curious Case of Benjamin Button? It is about a man who is born as a 70 year old man, and reverse ages as he goes through life. He eventually ends up dying as a young infant 70 years later.

While medically this is not possible, as the movie is fiction, progeria is real. It is a rare genetic disorder where symptoms reveal aging at a very early age. Early symptoms include a failure to thrive and scleroderma-like skin, which usually develops during a child’s first few months of life. After about 18-24 months of life, additional conditions manifest – such as limited growth, full-body loss of hair (alopecia), and a marked look (small face, shallow recessed jaw, and a pinched nose). Wrinkled skin, atherosclerosis, kidney failure, loss of eyesight, and cardiovascular problems begin to occur as the child ages, and begin to have small fragile bodies.

These are all symptoms of aging at much later years of life.

Proteus syndrome is a congenital disorder (meaning an individual is born with the disease). It causes an overgrowth of skin, muscles, fatty tissue, and blood and lymphatic vessels. Tumors can be found over half the body.

This is a progressive disease, where signs and symptoms slowly begin to manifest in children as they age. Skin tumors and bone growths begin to appear, commonly effecting the skull, one or more limbs, and soles of the feet. Premature death is possible because of the malformation of vessels, and arthritis and muscle pain can become a symptom because of the excessive weight and enlarged limbs.

Only about 200 cases have been confirmed worldwide.