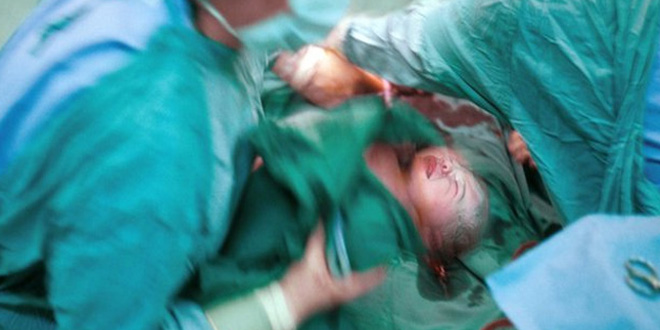 The irrational fear behind C-sections

Childbirth is not an event of a few minutes or hours, it’s a process that takes nine months to evolve and form a human being. Those nine months are crucial for the mother, not only for her physical well being but also her emotional, mental and social well being.

Not all births are the same. Every woman has her own story to tell, whether it’s the difficulty while conceiving, the tough times during pregnancy or the screams and cries of the labor room. One such incidence is the C-section.

A cesarian section is a process in which an incision (cut) is made in the mother’s abdomen and uterus in order to deliver the baby. Often the decision of performing a c-section is made if the position of the baby is not suitable for a normal delivery; there is a problem with the baby’s heart rate; the baby’s head is too big; position of the placenta is at the bottom of the uterus, etc. Usually the C-section is scheduled in advance, whereas there are times when it is done in an emergency. Women often fear a C-section due to multiple reasons.

THE FEAR OF SURGERY

The fear of going under a knife is reason enough to be afraid of undergoing a C-section. However, women are given an epidural (an epidural is an anesthesia given in the abdominal area) or even a general anesthesia at times and nothing is felt by the mother.

THE FEAR OF BEING ROBBED OF THE EXPERIENCE OF GIVING BIRTH

The experience of giving birth is probably one of the most important (yet painful) times of a woman’s life. However, if you are undergoing a C-section, it won’t make you any less of a woman or mother. The real joy lies in having a healthy child whom you can love, pamper, and make an individual out of.

THE NEED TO BOND

The bond of a mother and child is the most priceless bond in all human relationships. A woman may fear that the effect of general anesthesia might keep her from bonding with her little one right away, as the anesthesia takes a while to wear off. However, it’s just a matter of two hours and sometimes even lesser. After that the mother and child can have all the time together that they want.

THE FEAR OF HAVING A C-SECTION AGAIN

It was widely believed that if you have a C-section once, you will have to have it every time you have a child. However, that is not true. If you and your other babies are fine, then there is no need for a C-section for later; this is true for 70% of the women.

The scar would look nasty for a while but it won’t last forever. The scar will eventually fade or become lighter. Also, such a scar would hold immense importance in your life as that was when a beautiful soul was given to you by God. So embrace it and be proud of everything that you have been through!

People need to stop discriminating against C-section procedures and mothers who undergo them. This fear behind C-sections is irrational. Motherhood is an amazing relation and one should mar it with such pettiness.