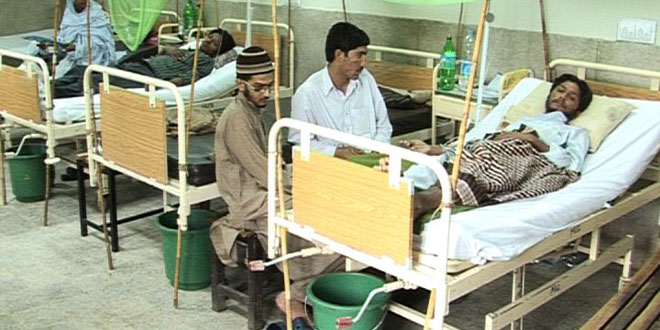 Karachi Metropolitan Corporation (KMC) has set up special dengue wards in its four major hospitals where doctors, paramedics and nurses will be available round-the-clock to provide timely treatment to dengue patients.

This was stated at a meeting presided over by Metropolitan Commissioner Samiuddin Siddiqui and attended by all district chief medical officers and KMC officials. The meeting was told that special dengue wards established at Abbasi Shaheed Hospital have 60 beds, whereas Rafiqui Shaheed Hospital, Landhi Medical Complex and Gazdarabad Hospital have 20 beds each. Besides this, all the special dengue wards have been provided sufficient quantity of medicines.

The commissioner directed KMC and District Municipal Corporations (DMCs) administrations to take all possible measures to prevent citizens from dengue and malaria fever. He also instructed officials to carry out spray in parks, swimming pools and underground water tanks across the city. He stressed the need for creating awareness about dengue virus among students of schools and colleges.

He also advised the citizens to adopt necessary preventive measures to protect themselves from dengue and malaria. In addition to necessary medicines and equipment, medical and paramedical staff has been deputed in the wards and would remain open for 24 hours on emergency basis.

Samiuddin urged the officials to take all possible measures to protect the citizens from Malaria and Dengue fever. He also directed to perform fumigation and sprinkling of insecticides for elimination of larva and mosquitoes in all city parks and swimming pools.